It has been about six weeks since our tribe leaders were elected, halfway through the current term. How are the current crop of TLs doing? Some better than others. Of those that were initially elected on September 1st, three were replaced by the second place winner within a day. Of the TLs who remain, some are active in their respective tribes. The TL for Xin-xi has not sent a single message since they were elected. 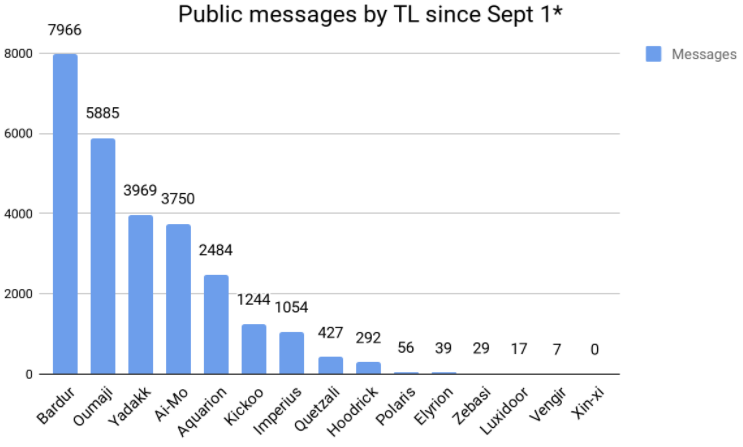 According to the most recent call for candidates, TLs are expected to:

What do server members think of the TL system?

Some members who have active TLs, like Ai-mo, don’t notice a problem. JackKuni, a newer Ai-Mo member said, “It’s the only system I’ve seen so it seems fine for me.” DG | Yadakk Rider said, “As for Poker, I think he’s good. He’s a decently active TL, and he doesn’t make things too serious or laid back. A decent balance.” Others with less active TLs were not so bothered by their absent TLs. LuxWatcher (hoodrick 4 ever) said, “I mean we have elections soon enough... yeah we will have a new generation of the leaders that are active.”

However many other members are not happy with only having one, often inactive, TL for their tribe. A member of Imperius, Gabe, said “Well, I personally think that we should have multiple tls, and that those tls should be chosen thru the amount of ppl that vote in the election.” Cathy , a tribeless member, said “One TL per tribe is good for the smaller ones, and easy to manage overall, though 2 max would be good for tribes with a larger community would be appropriate.” Sandwich,a frequent tribe hopper, said “they should do the amount of TLs based on members and activity and candidates available. then use a voting system electing each TL making it a more balanced system.”

What do the TLs think?

The TL of Kickoo, SpitchDuche, said “[The TL system] is bad, I dislike it... I run the server by myself, and I’d rather do it with people, so I chose some unofficial tribe advisors for the server. But even then, it’s not official and they weren’t inclined to do much. But enough of that. I dislike the actual system because well firstly they decided to elect only one person, and also tribe leaders have no power, and they are just a figurehead.”

PiKappa, the TL of Ai-Mo also felt that TLs should not be alone in leading their tribe. “I think the ideal system is one with a single TL and a few TAs. Having a single TL keeps the symbolism and helps fuel the tribe spirit, but the TAs give you the benefits of having people to run the tribe if the TL is busy.”

OMGDan, the TL of Oumaji, said, "I have mixed feelings about [the TL system]. I reckon the last system was better, for several people have the power of one, and leads to better management of activities and the tribe."

For most of the server's history, tribe leaders were not elected, but appointed by staff.

What do the mods think about the TLs?

The server staff seem to be divided about the purpose of TLs and struggle with what to do with the TL system. At least one mod has fond memories of being a TL. “When I was TL, what I remember the most was all of the competitions in which the tribe had to work together. It actually made it feel like a smaller community within a bigger one.” Another mod sees the TLs popular, but not needed. “I see tribe leaders as decoration, but the concept is popular and doesn't really harm anything.” Some staff only see TLs in relation to the server staff, as a conduit for communication between regular members and mods. One admin said, “I don't see how one TL or 50 really makes a difference currently. It’s not like there's anything TLs can do for a tribe that a normal member can't.” Another admin’s point of view is that if there are no tribe competitions, like tribe duels, the TL role is useless. In addition, the staff do not appear to value how TL roles have a ripple effect beyond main, for example in tribe-specific servers. One admin said, “Tribe servers aren't considered relevant in the discussions as far as staff is concerned.”

The staff’s ambivalence and lack of consensus regarding the TL system resulted in the unexpected election of only one TL per tribe. When asked why we have only TL per tribe now, an admin said, “The last election was a bit rushed on the back end, and only had a few people actually oversee any part of it. … There was a debate on 1 leader vs multiple. Part of the argument for 1 leader was it being simpler and it avoiding having many inactive leaders instead of just a few. However, even that seems to be moot as they were all elected before we really got a chance to finish discussion.”

What do you think about your TL and the TL system?

Give us your opinion by filling out this short survey.