“The only literate tribe deserves the best in information and entertainment” November, 29th, 2020

Today we packed together all the information gathered by our reporters: Espark, 1Chill, Druid, and ArcticFox. After gathering the information and finishing writing they put the text into the hands of our editors, Dust and Espark. Once they finished their work, they published this beautiful newspaper at ArcticFox’s website.

Tribe Leader Elections The outcome of final Tribe Leader (TL) elections was the big topic of discussion in the official Polytopia server this week. More votes were cast in this TL election than the previous two.

Reportedly, after this three month TL term, there will be no more TL elections and some new and undetermined tribe leader system will be announced. However, for this term, the mods decided that each tribe would be awarded 1 TL per 4 valid votes. Also, each TL candidate must win at least 3 votes to be a TL. 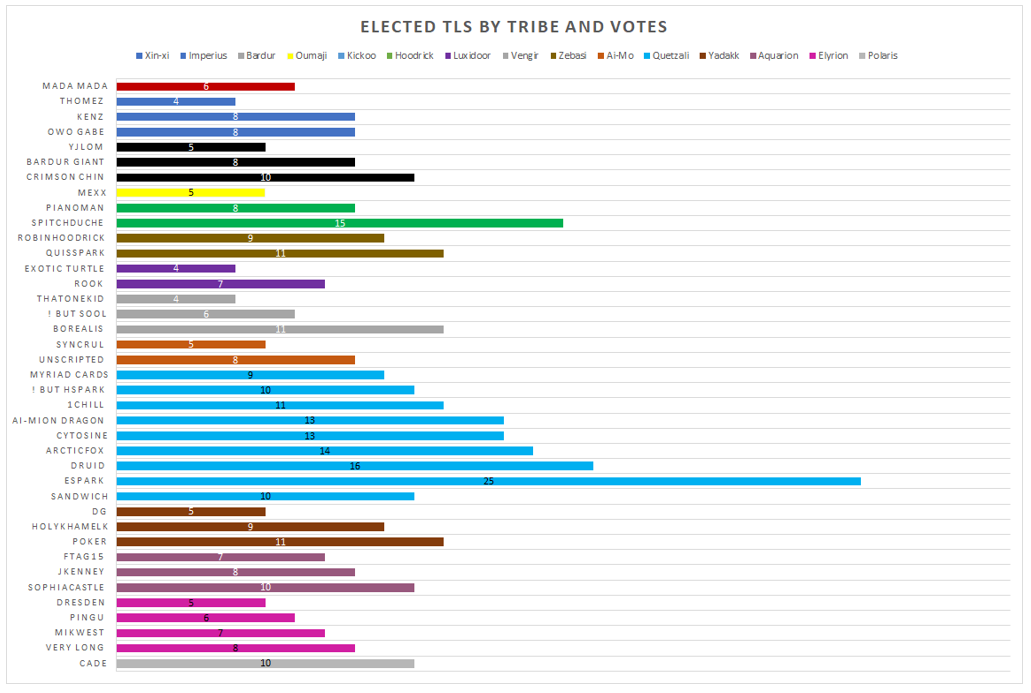 In the previous election, only one TL was awarded per tribe and a voter could only vote for a single candidate. This time, with voters able to vote for multiple candidates, there has been an explosion in new TLs. With 39 TLs, we expect the TL chat to be much more active compared with the past.

After the election outcome, some members and staff said there should have been a limit to the number of TLs, for example only five TLs maximum per tribe, but it was too late to change it.

Contests Thirteen submissions have been made to the November #music-submissions. Some are electronic music while some are classical. Some users submitted their creations as an MP3 file which may disadvantage their entry as iOS users cannot play the submission from within the app. With an MP3 file, some users will have to download it separately, which can reduce the count of people who will listen to their submission. Voting for the music contest ends today, so please vote.

Moonrise glitches The rollout of the Moonrise game update﻿ November 23 was largely a success. Games that were in progress migrated smoothly and everyone was able to download the update. The previous AIR version is no longer supported. However, many glitches have been reported from attacks not working properly, turns ending prematurely, icon resolution size, and others. A significant bug that many users have reported is losing access to tribes they previously purchased. There is a pinned message from an admin in #bugs-and-support that says, “Lots of people asking about why they lost their tribes, don't worry; they are working on a fix. Please be patient.”

Art Contest This week, Ai-Mo is hosting a joint art contest with Aquarion. Announcements were made in the monastery (and a similar one at the Crab Cult. The art should depict Aquarion and Ai-Mo having fun or having a peaceful interaction with each other. Any media type is acceptable. The winner will receive one months of free nitro. Using a different approach from other Polytopia art contests, we decided to anonymize the artists. We hope anonymous entries will make the voting more fair. Artists from Ai-Mo will DM their submission to Espark, while artists from Aquarion will DM their submission to ftag15. Artists have 2 weeks to finish their artwork and voting will be through a google form.

New Ai-Mo TLS Also we are happy to welcome our new TLs in the monastery. We believe that they will help a lot to Ai-Mo and do their best to make our tribe even more active.

Lastly, Ai-Mo Gaming made a video about the Luxidoor tribe, you can watch it here, and don't forget to subscribe if you want to get notified when great content like this arrives, or like if you think the video deserves it.

Tribe analysis by people in main:

The Balkhanu were originally a group of nomads that wandered their empty terrain relatively peacefully. One day, they saw members of a group called the Xin-Xi tribe coming into their territory and claiming Balkhanu Villages for their own. This put the Balkhanu into a fury. They decided they would take back what was rightfully theirs and teach the Xin-Xi (and other threatening tribes) a lesson as well. The Balkhanu kept pieces of their nomadic lifestyle alive, establishing temporary outposts to attack empires from where they would least expect. Also, they perfected a new combat unit that would strike fear in the eyes of enemies. The tribe starts with a level one capital and the Free Civilization tech.

Bastions - 14 stars to build Bastions function very similarly to cities, except for a few key exceptions. Unlike their permanent counterparts, outposts are built (they can be built anywhere other than inside enemy cities), don't level up like cities, and also if an enemy unit stays on an outpost for more than a turn it is destroyed, giving them five stars. You can only have 3 outposts in existence at a time, and they do give a defense bonus to units with fortify. If you happen to lose all of your cities, if you still have outposts your tribe will not be eradicated. It's actually possible to reclaim your empire because of another feature of the bastion. The bastion generates 1 star per turn (two if they are connected to your capital, represented by heavier fortification), and can use those stars to train units of any kind they can other than super units. Bastions don't have city borders either, meaning they can be placed next to villages and cities you control. if an enemy captures a city or village next to a bastion, or gets border growth that engulfs the bastion, they have to destroy it before placing anything on the tile it is on.

Nyrrv | Server Ancient 08/25/2020 Warhorse - 14 stars to train, 2 defense, 15 health, 3 attack, 3 movement, Dash, Piercing Shot, Escape (⅓) The Warhorse is like a super beefy rider, with a unique ability. The Piercing Shot skill can be used instead of any other combination of actions to deal a 3 attack hit from a distance of up to two tiles that ignores defense bonuses from Fortify, Archery, City Walls, Meditation and Aquatism. The button to activate the piercing shot ability is next to the heal button and disband button, and the attack indicator for the shot is green. They can also escape after a melee attack, but only one tile away, one third of their movement value (represented by the ⅓ after Escape) They are very useful units, and oftentimes can siege cities all on their own.

Animal - Mungalu - a brownish, white spotted horse-like with shorter legs than the Xin-Xi and Imperius Variants Fruit - Casil - four large, black, berries that resemble Black Currant fruit Mountain - A Winding mountain of crooked shape that has a small stream that flows through it Forest - Large trees (3 in a tile) resembling Ulmus macrocarpa Their terrain is a yellow-green (not quite as yellow as Zebasi's), and the tribes color is a steely Gray