“The only literate tribe deserves the best in information and entertainment” January 10th, 2021

Today we packed together all the information gathered by our reporters: Espark, Druid, and ArcticFox. After gathering the information and finishing writing they put the text into the hands of our editors. Espark and Dust. Once they finished their work, they published this beautiful newspaper at ArcticFox’s website.

Server loses Tribe Leaders. Gains artists and streamers. By Espark The new year saw some big changes to the server. On January 1st, all tribe leader (TL) roles and TL channels were removed. Director related channels were also closed/archived. New art roles and associated channels were created, such as Poly Fan Artist and Poly-streamer. The server manager wrote, “We wanted to put more of a focus on showcasing the talents of the Polytopia community at large, and so more channels have been added for artists and streamers to show off their abilities!”

One admin, Alfrik, explained the end of the TL system this way. “There were a lot of reasons why we removed TL. If I'm being honest, we've had more small annoying problems with it for a very long time. We'd gone through what like four or five systems in a year because we couldn't find one that worked. In my opinion, the big two reasons were that; the role was no longer as useful as it once was and too many tribe leaders and election candidates were getting into fights over it or causing drama and getting demoted. The system was just generally unfulfilling and we had no actual job or requirement for TL's. It grew into more of a ceremonial role that didn't really play a major part anymore. We felt the lack of any real reason to keep them was the final straw to removing the role.”

Since tribe leaders were introduced in 2018, the TL system has gone through many changes. For most of the role’s existence, TLs were appointed by staff. Then, in May 2020 the first TL election was held. In November, it was announced it would be the last election and at the end of the three month TL term, the server would switch to a different way to manage tribes that doesn’t involve elections. In December, the server staff had announced the idea of a new system to replace the TLs, including more autonomy for directors to run events. Then on January 1st, after only five weeks into their terms, the TL's lost their roles.

Most members approved of the new art and streamer roles. The artist role was initially awarded to any member that had won an art contest in the past. However, anyone can request the role from a mod after sharing some of their fan art. There are no duties or permissions associated with the PolyFanArtist role. Similarly, the PolyStreamer and Other Streamer roles do not have responsibilities, for example expectations to stream on a regular basis. Regarding the streamer role, one mod said, “We tried to make it as easy as possible so that people are more encouraged to stream. If there were lots of guidelines and rules about it, people would be discouraged.”Yjlom, a former TL of Bardur thought the new art and streamer additions were good, but not at the expense of losing TLs. Yjlom said, “I feel as if none of the new things provides any form of replacement from TLs, but art and stream categories could really help activity.” One former TL, jkenny had mixed feelings about losing his TL role. “I dislike the removal of TLs because it takes away the TL chat (and I got hoisted). But I like the role removal because it allows for more freedom in moving between tribes so I can explore more communities.”

However, most members were disappointed at the loss of the TL system. Some were not even aware that the TL system was about to be abandoned. Other’s had expected the end to the TL system, but not so soon.

Mada Mada disapproved of the premature ending of the TL system. The former TL of Xin-Xi said, “I think we should've at least gotten to serve our regular 3 month term just like the other TLs used to.”

Squelchyman, a former TL of Bardur said, “I don't really get why the moderation team went about this the way they did, lol. I guess they just really didn't value the community's opinions. The one time we spoke to them about it in TL chat they got defensive as usual saying it was just in the plans. Now suddenly they shut down the TL system as quickly as they can (mid term) without any real prior warning.”

Others dislike how the new channels are organized. Myriad Mexx, a former TL of Ai-Mo said, “I don't like the reorganization of channels etc. Server-feedback being above bot-commands is uncanny. Also, So many art channels imo isn’t necessary.” Myriad went on to argue that promoting YouTube videos will draw activity away from the server and split the community. “People will spend time watching YouTube rather than chatting on discord. Discussing specific YT accounts is the kind of thing broad enough to be worth creating a server for. Multiple server-worthy topics on one server splits the community into smaller sub-communities, which lowers new member retention, and can cause old members to leave.”

Alfrik, an admin, explained that the reorganization was intended to reduce the number of channels in the server. He said, “We felt a lot of channels would intimidate new members and thought a lot could just be merged into others. We have way too many channels in this server ... and we also felt that one community content channel wasn't enough. So to make room for new expanded community channels we merged and archived a handful of channels.... If it doesn't work out after a while we still have the channels in archives that we can bring back if we really need to, but so far it seems people are having difficulty adjusting.”

Reportedly, the staff still have some ideas for a new tribe management system but no one has made an executive decision or final vote to put the plan into action. Recently, mods have said that more changes are coming to the server. However, it isn’t clear if the artist/streamer additions are part of the replacement system for the TLs or what is happening with the director role. We’ll have to wait and see what, in any, more significant server changes may arrive.

The final rounds of the PolyChamps Bullet Tournament were live-streamed on Jan 3 and Jan 4th. The attendance for both matches was impressive. At one point, 38 members were watching the EST bracket final round between LEGEND_HITARTH and pomthom. Over 22 watched the grand finals between Bakalol and pomthom on Jan 4th.

Karuin, one of the commentators said, “I like the livestream format a lot. It was nice to have something polytopia related to view. For the North American finals, it was me and Disco who commentated and for the grand finals it was me, skrealder, hitarth and spj.”

Jr Wolf, a PolyCamps team Mallard member said, “I thought it was great to show off high level games here rather than steam them to PolyChamps, although most of the people watching were from PolyChamps anyways.”

Two new areas for a minigame called Bedwars were added to the PolyCraft server. The two arenas, one normal/default sized and another larger size, are still being tested. Each features four tribes, up to 16 and 32 players, respectively.

The idea is to keep your bed intact while destroying your opponent’s beds. The game starts with brave soldiers dropping onto a battlefield composed of an archipelago of floating islands, from which falling leads to certain death. This is not at all a problem. As long as your bed is intact, you will respawn once again onto your starting island or base. A key strategy is to surround your bed with building blocks in order to protect it from being broken. Your opponents will also have their beds on their islands which you must attempt to break in order to give them the final blow. Once you kill someone whose bed has been broken, they are eliminated and will not respawn. In order to acquire the hardware you need to implement your defensive or offensive plans, you'll have to buy it from the shop. There is a shop at each base where you can purchase everything you need from weapons to tools, food to building blocks, and even cool gadgets! But like everything in life, things have a cost. The currency in bedwars works simply. The most basic currency, bronze, will spawn at your own island. With this you'll be able to buy simple blocks, weapons and tools. To acquire the higher range of items available in the shop, you'll have to use your blocks and bridge out to the other islands on the map. Respectively, Iron and Gold are the two other resources, the latter more valuable that the former. Iron spawns on small islands located between the spawn islands for the teams or players, and gold spawns at the mid island, a massive landmass located between all the bases usually with a big building making PvP in there especially interesting. The objective of the game is to be the last one standing and to have had fun.

The Bedwars minigame seems to be off to a great start. OG_Drummer said, "I really enjoy bedwars but hate when resources are eaten by clearlag. Oh and clearlag stole my girlfriend earlier. I was very sad about that." Another player and server mod, Omgdan said, “The clear-lag is a real problem. And the lack of access to a basic sword with bronze is also not ideal. Overall, it's amazing how they've managed it out.”

Congratulations to Mantis for winning the Concordance Day art contest. His sculpted figures depicting the first Polytopians was selected by Midjiwan as the winner. Ai-Mo is proud to have such talented artists in our tribe. 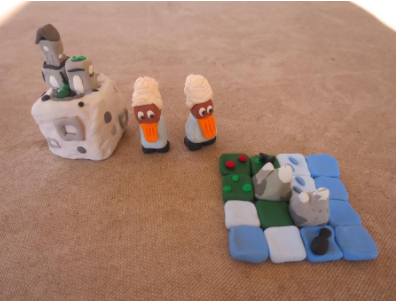 Bug tribe sprites: Recently THomez, an active concept artist in the community and discord server, managed to extract the sprites of the new tribe out the "leaks" made by Zoythrus with some other users, you can view them here:

All it takes is one knight:

This week's list includes mutes and bans made since Jan 1.

Below is a chart of the distribution of public punishments made by server staff since the newspaper began tracking December 4th. 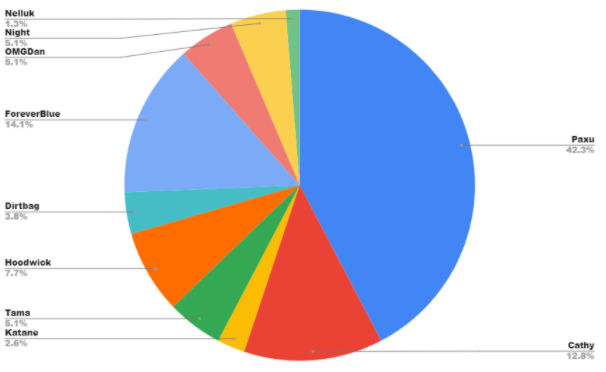