“The only literate tribe deserves the best in information and entertainment” February 7th, 2021

This week we present the information gathered by our reporters: Espark and Druid. After finishing their writing, they put the text into the hands of our editors, Espark and Dust. Once finished, they published this beautiful newspaper at ArcticFox’s website.

Bug Tribe Trailer On February 5th, the devs gave Polytopia fans a sneak peak of the new bug tribe. We also learned that February 17th is the official release date. The name of the new tribe is still secret. Fun fact, the new tribe announcement trailer video was originally titled ‘3840x2160 wLogos noTesla Secret 1.’ Aetholis, a fan tribe artist, was excited by all the details in the trailer. “I was amazed. The animation was cool, but I was even more excited that the tribe was coming out on February 17th! I have now watched the trailer 50 or so times, at 0.25% speed, to extract some sprites. I wonder what the tribe will be called. Arakhnia?” Some fans were pleased by the new firefly type flying unit. Others were surprised to see flying units in the trailer as admins have reportedly said that Midjiwan said he would not make any more units that have the same ‘fly’ ability that dragons do. Migual said, “There are many bugs to be found within the bugs.”

A server admin confirmed that the new tribe will cost the same as the other special tribes. He also acknowledged that the new bug tribe might get tweaks after release. Gaami responded with, “Also, as soon as this tribe gets nerfed like we know it will, people will like polaris better.” The trailer has sparked many questions about the new tribe. Besides the tribe’s name, the mechanics of the tribe, its special tech tree, and unique units are all still a secret. King Krab said, “The real question is did the bugs learn to drive the teslas?”

Companion Servers On Feb 6th, the main Polytopia discord added a new category of companion servers. A few servers are already designated as companion servers, including the competitive servers PolyChamps and Giants League, but new servers may be added later. In addition to being Polytopia themed and approved by three main server admins, companions servers must have at least 60 members, provide a unique experience different from main, and not allow NSFW topics.

SpitchDuche, the admin of a couple Polytopia related servers said, “I think it’s a good idea I guess. People have always wanted a place to put servers in, but they will only put the most important ones now.” THomez, the admin of the HIve Bug Tribe fan server said, “Brilliant idea. It gives the server recognition that was much needed in an easy to find place”

Some admins of outside Polytopia themed servers are unsure about the new companion category. Quisspark, the admin of the Polytopia Art Gallery, said, “Before #companion-servers was public, I was offered companionship status. I declined the offer because I didn't know what it was going to be like, and if I could handle it. Also, it might not have a unique experience because #art-discussion #polytopia-fanart #other-art exists. Looking back now, I might reconsider. I don’t know yet.”

As Paxu, a main server mod explained, “I think it's still a new idea, but a good one. We've never tried it before but we thought it would be a nice way to promote alternative experiences in the Poly community that we also enjoy (many staff members have a major presence in Polychamps for example). I personally would love to see unique servers with a more niche audience grow and expand, because sadly as the main server we can't focus on some particular aspects in as much depth as a dedicated server to those aspects could.”

Druid, an admin in the Ai-Moya tribe server, had a different point of view. He said, “In theory, companion servers are a brilliant idea. A server can uphold a clean view and offer something special in the Polytopia community. In return, the server gets more members and promotion in the main server. This is all fine and dandy until you see the need to look deeper at the server requirements and purpose.

“The companion servers category expands the sphere of influence that main holds. The restrictions on server content bleed out all indecent material (despite what happens in #general). On top of that, three admins must verify and approve the server. That is all an understandable process, but it is unnecessary. This approval process allows admins in main to grab and grasp power.

“We have already seen main exert control. For example, as the rules of Beta leaks with the new bug tribe have been crimped down on by the owners of servers trying to become companions. This prevention of leaks is not a bad thing, but it aligns all these companion servers into clones of each other. The same people hold control up the same ladder, but they now have the threat of ‘You want to keep your companion status, correct?’

“In short. while companion servers are not a bad thing, the category places unneeded restrictions and homogeneity on smaller Polytopia servers. Also, it grants main admins power over the smaller servers. Many servers, Ai-Moya included, will not bother with the system even if they do meet the standards. Fans who want to join these niche servers have always been able to join and not having companion status won’t change that. As the sphere of influence of main grows, we can expect a change in the tone of many of these smaller niche servers and possibly more, in the long run.”

February 1st marked the official start of the Ai-Mo tibe moon. We got some new Ai-Mo lore in an announcement. "They haunt these mountains, throwing rocks and pushing unsuspecting pilgrims to their doom!", the storyteller tells the children about the mighty Oo-Li, "But don't fret, little ones, the Oo-Li in these hills provide blessings to our cities when we give them offerings of Llamo meat and tasty fruit." 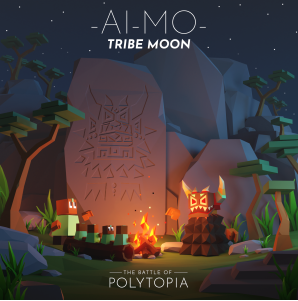 The art contest for the tribe moon is a combination art and writing event. Here are the rules:

Create an illustration of a polytopian folk tale you invented, and write a short summary of a couple sentences to go with the picture. Hand your submission to #folklore-submissions before February 18th at 10pm UTC. One submission per person please and no low-effort artworks.

May inner peace and philosophy flow through the server this month.

As was posted on February 1st, our tribe is excited to celebrate the Ai-Mo tribe moon.

Time to celebrate the Ai-Mo tribe moon. This month, Ai-Mo has some special plans. During February we'll host a llama parade every Sunday in PolyCraft. In Ai-moya, we have art and game challenges. Also, we need to prove that !besttribe still rings true. Show us your activity. Let the philosophical conversation in the monastery flow. Flood general with cyan names. Let your inner peace and mind bending prowess shine.

Ai-moya is currently hosting a super mind bend game challenge, rules can be found in #the-quartz-pedestal. Later this month, we’ll host an art contest. Also, in Polycraft, we have a new temporary issi tea shop and llama parades on Sunday mornings. To encourage and support Ai-Mo Polycrafters, a month of nitro will be awarded to any player who earns 75 points cumulatively for Ai-Mo throughout the year.

So Many Llamas: by OG_Drummer

OG_Drummer wrote and performed this wonderful fan music video to celebrate the llama parade for the Ai-Mo Tribe moon celebration in PolyCraft.

Who's muted this week: