“The only literate tribe deserves the best in information and entertainment” February 21, 2021

This week we present the information gathered by our reporters: Espark, ArcticFox, and Druid. After finishing their writing, they put the text into the hands of our editors, Espark and Dust. Once finished, they published this beautiful newspaper at ArcticFox’s website.

Twenty months after the last tribe was released, a new special tribe, the Cymanti, was released on February 17th, 2021. 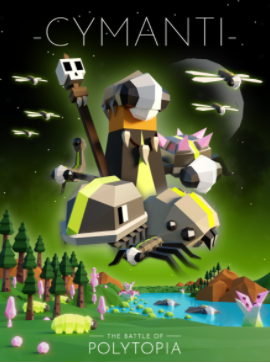 Cymanti is the 16th tribe available for Polytopia. It has nine special abilities, eight new units, including the Centipede super unit, and a new terraforming ability by spreading algae across water. It is the most complex tribe to date. 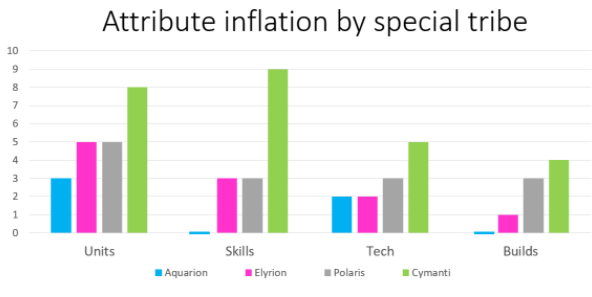 Shaman (mind bender substitute) - starting unit that has the Convert and Boost abilities. It attacks before converting, although the enemy unit will not attack back.

Phychi (archer substitute) - has the Fly, Dash, and Poison abilities

Raychi (battleship substitute) - has the Dash, Float, Creep, Navigate and Explode abilities. Upon explosion, Raychi will leave algae on the death square and poison all enemies it damaged.

Kiton (defender substitute) - has the Poison ability. They don’t have fortify, but that’s compensated by having 20 hp.

Doomux (knight substitute) - has the Dash, Creep, and Explode abilities

Abilities Boost - Unit can boost surrounding allies' stats until they attack an enemy, capture village or heal. Boost stats are: +1 movement and +0.5 attack. Creep - Unit can move over mountains and through forests without movement penalty. Eat - Unit grows in length for every kill it gets. Explode - Unit explodes, causing damage and poison to every enemy unit that is next to it. Damage done equals what the unit would do by attacking a single target. When the unit explodes, it leaves either a spore or algae on its death field, depending on whenever it’s on land/water. Fly - Unit ignores all movement barriers imposed by terrain. Independent - Unit doesn’t take population space from its home city. Poison - Unit will poison enemy upon attacking or while defending. Poison decreases enemy defense by 20% and healing by 50% until the enemy unit regains full hp. If a poisoned unit is killed, they leave algae/spores on their death spot. Poison can be instantly cleared by mind bender or Mycelium heal. Poison can also removes any defense bonus unit currently has. Sneak - Unit can move past enemy units without any movement penalty. Splash - All enemy units adjacent to the targeted unit receive half damage, rounded down.

Algae: Algae can be built on ocean and shallow sea tiles and allow any type of unit to stand on the tile where they are present. Algae costs 5 stars and is unlocked with the Hydrology tech (replaces sailing). They can only be built in your territory, the only way to spread algae to enemy and neutral territory is to make raychi explode or by killing a poisoned enemy on the tile. Algae makes Clarathuses on adjacent tiles level up.

Clarathus: Clarathuses replace the Custom Houses, they are unlocked with the trade tech, they produce 1 star per turn per every adjacent algae.

Mycelium: Mycelium replaces the roads and is unlocked with the roads tech, they make city connections through cities, other myceliums and algae a maximum of 3 tiles away. They also heal nearby units. Leveling up is purely visual.

By Espark, with help from Cat-As$-Trophy and starlite

Cymanti are strongest on land. Several abilities give the tribe a land advantage. In the early game, boosting units like hexapods and warriors with the shaman can overwhelm an opponent. Creep negates the movement penalty from forests or mountains. Finally, the explode ability is a powerful tool, not just to kill enemies, but also with poison. Poisoned units have no defense bonus (i.e. walls are negated). Then, when a poisoned unit dies, it leaves behind spores which can be strategically used to grow a city’s resources. The bug tribe is weakest over water. Although phychis can fly over water to claim ruins and cities, to confront an enemy across the ocean it takes more effort. In addition to building algae within your borders, raychi can be exploded to leave algae behind in open water or enemy territory. Algae can also be placed tactically to delay enemy naval advance as they are considered rough terrains. However, oceanology and rachi are expensive and laying algae across open water is time consuming and costly.

The centipede super unit also has pros and cons. The eat ability is powerful (and fun) allowing the centipede to expand and destroy most enemy units in one hit. The ability to regrow a head or to split into two if cut off at the middle is also powerful. However, the unit has some weaknesses. It can get twisted up and stuck if you are not careful about which direction you move it. It’s main vulnerability is to knights. A knight chain attack up the tail can wipe the entire centipede out.

Knights are not only effective counters to the Centipede, but also a menace to the rest of Cymanti's army. Compared to other tribes, bug units are relatively fragile and have a tendency to rely on numbers. A weakness to riders and knights is the biggest downside to Cymanti land units because of their fragility and lack of persist units.

Mindbenders and catapults may also work against Cymanti, but are more tricky to pull off. Mind Benders not only cure poison with their area heal ability, but also serve as great deterrent to a Cymanti's offense due to their lack of Persist. A Cymanti player may be baited into overcommitment and lose their Doomux or even a Centipede to enemy mind bender or be manipulated to spend on unnecessary units which delays their offense. Catapults can be soft counters to the likes of Kitons, but not against Hexapods or Doomux.

Read more about how to play the new tribe in a strategy guide for Cymanti by HelloIAmBush.

Most of the reactions to the new tribe were excited and positive. Over 230 members have joined the new tribe in the main Polytopia server and the Cymanti Hive server has over 100 members.

A new member to the discord server and Cymanti tribe member, pfd473c, said “Damn, I just played a great game with Cymanti. I'm really diggin the new tribe. And like over short naval stuff, like you have to lose some of the oceanology guys to create algae.”

Bug#3, a bug lover, said, “[There is] a lot of distress about the new tribe. Some people think it’s a lovely new addition, but others think they are here to take over.”

Regarding the look of the new special tribe, THomez, a recent art contest winner said, “This tribe has a very unique, and distinct art scheme. The ground is a bumby, uneven tile covered in moss. At first glance the ground tile may look similar to Ai-Mo’s, but in reality they are very different. The whole tribe introduces a whole new art aesthetic. Its fruit isn't even the 'usual' type. It is, in fact, some clear liquid drops that could be nectar or some kind of sap. No to mention the new fungi farms. They use the old polaris forests, and are a bright pink, clearly showing they are poisonous.”

Skrealder, a former leader of the Crawfish team in PolyChamps said, “[Cymanti is] by far the most interesting special tribe, imo. It’s flexible to any map type with unique tech pathing that gives the tribe a myriad of playstyles. They’re a more aggressive tribe with less defensive control & long-term economy, but have a vast number of offensive and supporting combat tools.”

However, not all the Polytopia community reaction has been positive. A new anti-bug server was created shortly after the new tribe was released. Currently, the Polytopia Bug Spray server has over 50 members. One of the mods of the anti-bug server, the notorious f.o.p, said, “For my personal opinion on bugs, birbs naturally eat bugs. It’s just the circle of life. Also bugs that latch onto your head sound painful, and I want to keep anyone from being infested with a parasite.”

Snooper, the leader of the Bomber’s team in PolyChamps said, “Its dumb. Cymanti is a list of reddit suggestions crammed into one tribe. It does not really fit in well with the rest of the game. [The devs] should've spent more time fixing the old tribes, but I guess revamping old mechanics is hard to fit into a headline.”

Rise of the Centipede