On May 18th, the winner of the Luxidoor currency art contest was announced.

Viera903 took first place with 193 votes Tied for 2nd place was both Hardizzel and PapaBless with 167 votes each.

About an hour before voting closed, three players, Papabless, P.Mark, and Hardizzel, all had 167 votes and it appeared as if there might be a three way tie for second place. A dilemma came up about what to do if there were four winners since the admin team only had three steam keys to award for prizes. One mod offered to remove one of their votes if there is a tie. Then, with only minutes left before the polls closed, someone removed a vote from P.Mark.

When the initial announcement proclaimed Viera in first place, Hardizzle in second, and PapaBless in third, multiple server members protested that PapaBless and Hardizzle should tie for second if both had the same number of votes. THomez shouted, “2 PEOPLE GOT THE SAME. ONE SHOULD NOT BE PLACED OVER THE OTHER.”

At first, the admin who posted the announcement did not want to edit it. One mod argued, “We have 3 prizes to give out idk what makes you think that things work that way” and “lmao boohoo how unfair they got the same prize.” Another staff member said, “Am I supposed to pull a steam key out of my ass?”

After that, one mod said, “Yes I understand what you mean now.” but still the admin who made the announcement did not want to change the post saying, “It doesn't need to be edited… but I guess I can.”

A moment later, the announcement was edited to show Hardizzel and PapaBless in joint second place.

As THomez summed up, “There are two issues that I am annoyed by...The first is the presentation. Which has been resolved. The second is that 3 people were tied for 2nd place for the majority of the voting time. When you started counting, (I set an alarm to get and watch the counting), P.Mark was messed with for about 10 seconds. But what really annoys me about this is that when I was yelling about the position presentation, Alfrik responded with "Anyway, we only have three keys". This makes it sound like you guys were intentionally taking the 10 seconds or so where [PMark] was behind to count him as lower than the others, just so you could [use the] 3 keys. But then later Alfrik says you could have asked for a 4th key when I bring said matter up. Which seems like now you are saying that so we believe you. All in all it seemed like you took the opportunity to get P.Mark off the list. It really was like for ten seconds. Also following that [Tama] ( @Elizardbeth ) had a controversial message stating that [they] would intentionally rig the votes. Thus these make it seem like you were rigging rather than just counting.”

Regarding the winners announcement, Alfrik, an admin, said, “It was really just a wording mistake with how it was ordered in the announcement and Thomez exploded about it. I barely had a conversation through all the screaming, lol. We have 3 prizes for every art contest and yes we can ask for a 4th but there were a top 3 winners. I do understand that 4th place was just 1 vote behind but the votes were clear. I tried to make this easy to understand but there was still a long argument about it and Tama was accused of rigging it somehow by removing a vote. I don't believe that at all. But apparently that was settled and maybe someone else changed a vote last minute? Idk.” 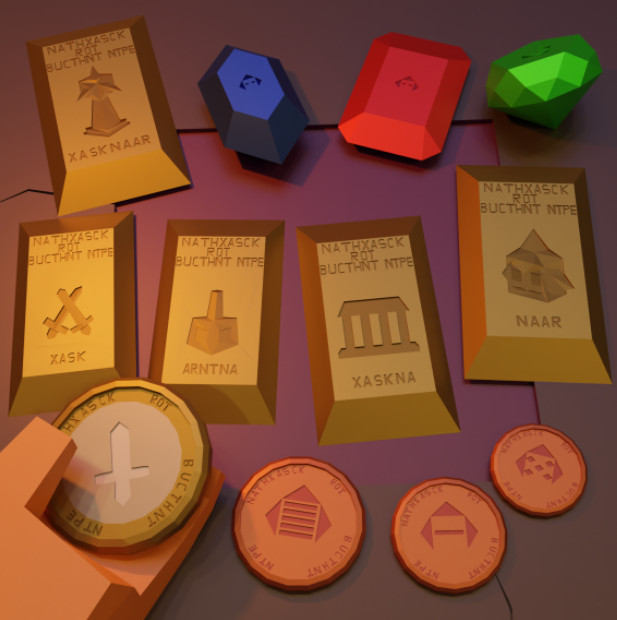 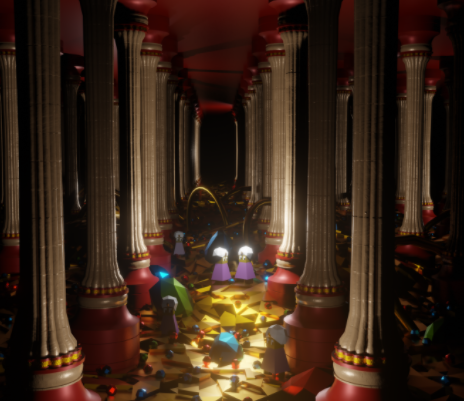 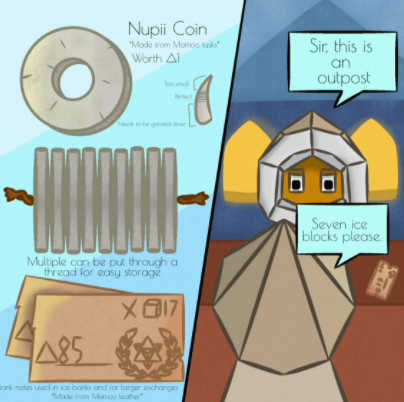 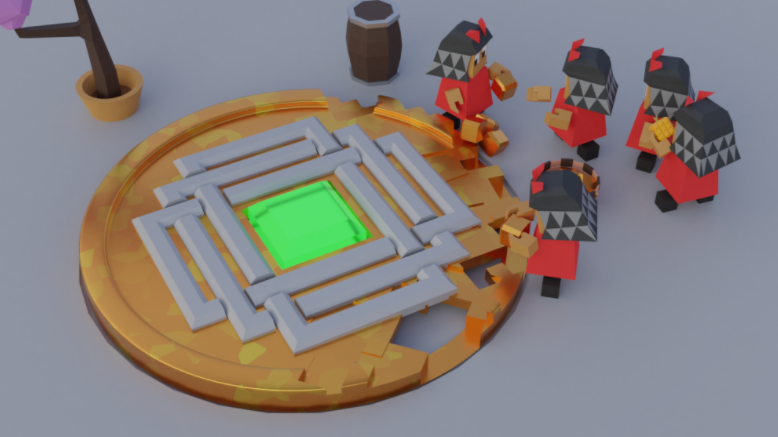 You can see all the art entries and their accompanying blurbs in Luxidoor currency submissions channel.

On May 18th, a Luxidoor moon gameplay challenge was announced called, Show me the money.

We are making plans to celebrate Polytopia Pride next month. Pride Month is celebrated around the world every June to support and celebrate LGBTQ+ people and culture. Ai-Mo is getting ready to wave some rainbow flags, douse ourselves in glitter and join in the fun. Let Espark or PiKappa know if you want to help or have ideas to make June in Ai-Moya fabulous. 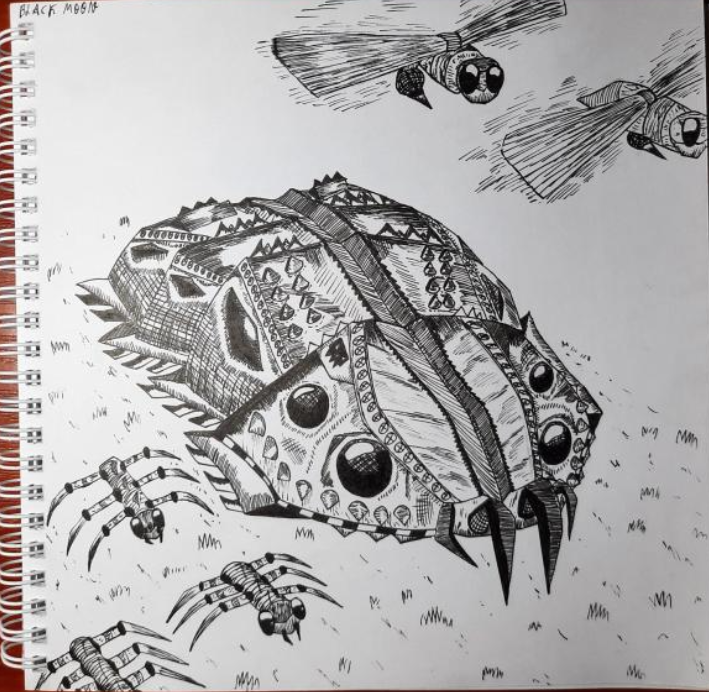 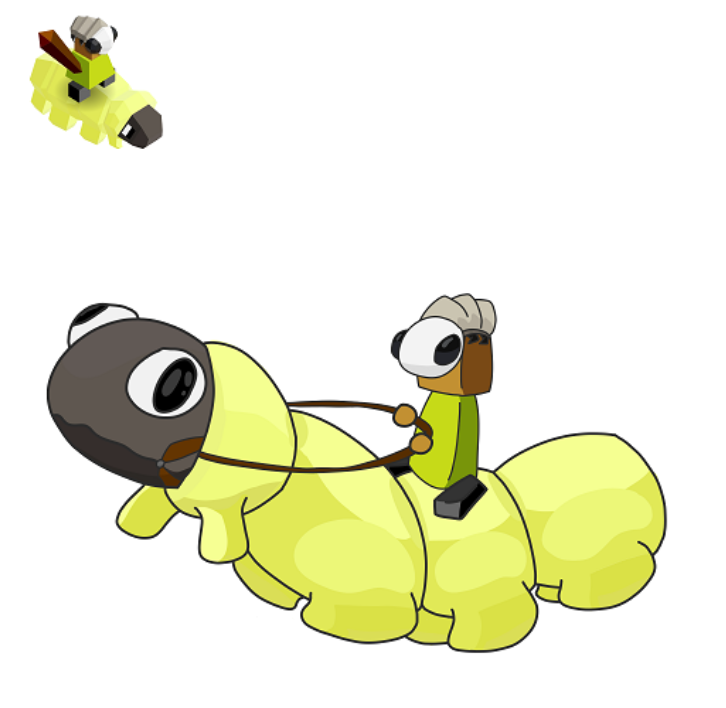 Ftag: I think it was like, almost two years ago. I was playing Polytopia and I was like, maybe they have a Discord server . So I just decided to try and found the discord.

Tnt: Okay, so through your own research, then.

Tnt: You joined the Aquarion tribe. What was the deciding factor for that?

Ftag: So at first, when you went to such a big server, you don't really know what to do. I kind of like the team of acquiring the sea, and that stuff. So I just decided to join the tribes, which is a requirement I lived in.

Tnt: Is it like the whole theme, role play, or is there any specific aspect that attracted you? Or just the tribe in the game?

Ftag: I think the team because I grew up in Portugal, and I have that sea culture in a way. So I can relate a little bit with the Aquarion.

Tnt: For the Aquarion tribe The Crab Cult, you’re admin and mod. How did you get those roles?

Tnt: What are some of your responsibilities in the server?

Tnt: Would you say you play Quetzali a decent amount since it's your most logged tribe in polyelo?

Ftag: I can say I play them a lot. I play a lot of multiplayer, but mostly in ranked. So up to I will say that I play more with Aquarion or Bardur. I love to play with Quetzali.

Tnt: Is it the shields, or perhaps the artwork or what's so enticing about them?

Tnt: Your elo as of about a couple of weeks ago is 1200 despite the reset. I take it you play a lot of games to get it up so high so quickly?

Tnt: How did you join the Mallards?

Ftag: I was in Polychamps and I was doing some games. And I forget like to enter the drive three times. But the fourth time, I had different teams talking to me, but I just like the environment in the Mallards. And at the time, Bush was in the Mallards and he was talking to me to join because they are building the team so I say “Why not?” So I decided to join them.

Tnt: So is your favorite tribe Bardur then, or is it something else?

Ftag: Oh, I will say Aquarion. I don't play them as often because the obvious problems I they are so fun ‘specially like in big maps like a 1v1.

Tnt: Get enough tridents or eventually come on with your slow crabs, right?

Ftag: Honestly, I almost never get crabs. I just like I love to play with fast expansion and map control so I spend the amphibians, get map control, and then spam tridentions. It's quite simple, the game.

Tnt: Because starting out with farms gives you to pop instead of one for a starting resource?

Ftag: Maybe, but I think it's just more than the type of map generation that normally they get.

Tnt: You have a favorite unit?

Ftag: I think I’ll have to go with the tridentions. They are just awesome. First, they are like riding turtles, which is awesome. And second, they are super.

Tnt: Yeah. Because knights aren't water creatures and tridentions can go in, attack, and retreat.

Ftag: Yeah, and it's fun like when you are in the targets and you are using Aquarion. Then you just strike go back then he cannot attack you. And you keep doing that just annoy the other person.

Tnt: Definitely. That's why a lot of people have a love hate relationship with Aquarion. How many games are you usually in at once?

Ftag: I try normally to not pass 20 games because I burn out easily from discord and playing Polytopia. So I just try to keep a low number of games just so I keep active and don’t burn out.

Tnt: It’s always interesting to hear, even though there's lots of different rank players. Some are playing 30 or 40 games. Some are only playing 20 or even 10 or less.

Ftag: I’m also very lazy. So sometimes I kind of want to play when I can go into this stuff, but I just forget to create games or I'm too lazy sometimes.

Tnt: Last question. What's your favorite part of the Polytopia discord as a whole?

Ftag: I really like the fact that there are people from different countries all over the world and you can just connect with people easily. And you can find a lot of people that have the same interest as you. So it's really fun being able to talk with people and play a game that everyone likes. It’s just awesome.

Tnt: That’s all the questions I had.

Ftag: Okay, thank you for everything. Have a good night.

Tnt: You as well. Thank you for your time.

Thanks to all our contributors - Espark, Dust, 1Chill, Tintin and Tntmasta. A big thanks to Artemis for setting up the website for the newspaper. Also, thanks to our faithful readers for encouraging the paper to continue.