On July 3rd, the Zebasi Tribe Moon art contest was announced. The prompt was to “design a Polytopian's living space and Polytopian(s) performing some kind of activity related to them in it (example: Imperius preparing a fruit salad in their kitchen).”

As has been the usual pattern, the top winners either posted last, used Blender, or both. 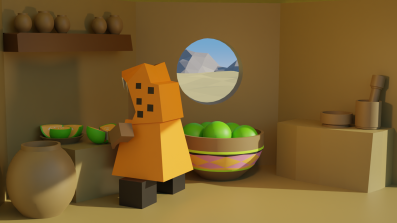 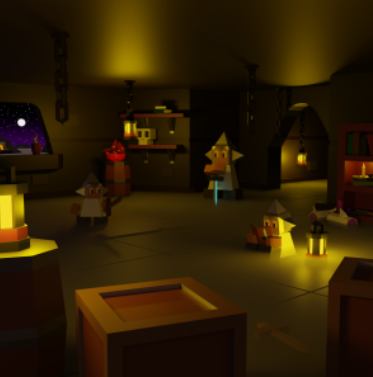 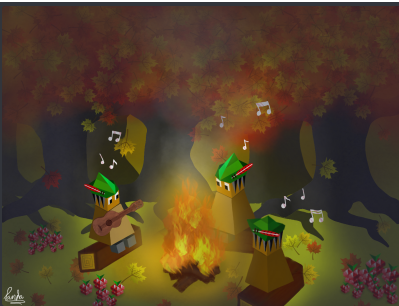 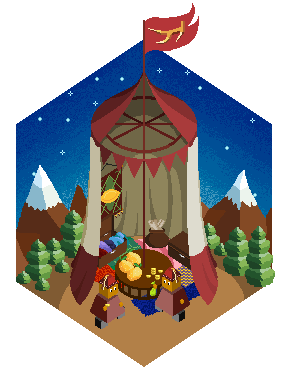 A very close place 4th and honorable mention by Mokia

Why Join a Tribe?

Besides getting a nice color for your name, joining a tribe often provides users in PolyMain with a deeper sense of belonging. Since the end of the tribe leader system and the lack of any tribe-specific events or contests, more and more people have moved between tribe roles, so-called “tribe hopping.” Previously, it used to be against the rules to tribe hop, but now, switching tribes is not only permitted, but encouraged, as several mods regularly switch tribes. When server members were asked why they chose their particular tribes, most responses fell into two categories: people who join a tribe because of in-game attributes and those who stay in a tribe for the community.

The more active tribes like Ai-Mo and Quetazli, have members who said they were there because of the community. Kami said, “Ai-mo has a really open and nice community.” About switching from Polaris to Ai-Mo, Eis said, “I just liked the shithole of insufferable, whining, petulant, incessantly complaining and somehow overly proud at the same time babies that comprise Ai-Mo.”

Comments about being in Quetzali also touted the activity there as the main reason why people liked it. Quisberry said, “I feel like most people are in Quetzali because it's active. That's the reason why I am in it. I would prefer to tribe-hop, but the other tribes are just too dead.”

Cody equivocated, “Quetzali is like my third favorite tribe, maybe second, I actually like Zebasi the best. However, I have many friends in the Quetzali chat who talk daily, so it's very nice.”

For the other less active tribes, members said their choice was based on their in-game tribe aspects. One member of Aquarion, Otlaxuv said, “It's simple. The color pink and the calm feeling of splashing waves.” About being in Aquarion, Tama said, “I like the theme, not the theme song. I mean the concept in general: water civilization stuff.”

Joxat said, “I just like Xin-xi. When I first played on mobile in 2019, they were my first tribe and I enjoyed it a lot.”

Potato said, “The Oumaji-oasis believes in Oumaji supremacy. They are completely correct, and all other tribes are evil.”

Mokia gave her point of view, “I joined Quetzali because I liked their aesthetic originally. Didn't know if it mattered which I joined. I stayed because I like the community. I've noticed that the tribes tend to attract like-minded people. For example, since most Quetzali members are there because of aesthetics or the community, not the game, we tend to be more “all tribes are good” compared to others. Because we just want people to talk to and be nice to each other.”

T-shadow said, “Well, right after I stopped hating Cymanti (for many reasons), I decided to leave Aquarion and become tribeless again because I wanted to change to another tribe after ages. Then, someone gave me drugs while I was sleeping that made me join Cymanti, and then he held me hostage for some time. Then, I escaped and I decided to stay in Cymanti because their lore and things seemed to be more interesting than the other tribes’ ones.”

A long time member of Oumaji, omgDan, explained it this way, “The gameplay is what reels you in, but the community is what forges a tribe's identity. That is what cements me to Oumaji. Being a part of Oumaji started off as a way of connecting to the people I hung around more on the server, but it became so much more. The people that were more active at the time formed a meta-community. It's the thing that glued us together as mates.

“Months go by and tribes stand strong. Their player base in the community gets built around certain core people. Then, when PolyCraft came along, it was another excuse to join ourselves and bind with our kin. And the sense of being at home is what keeps you in a tribe. It's identity. I'm a part of it, with great honor, and I probably won't ever leave for all that I lived and all there is to live.” 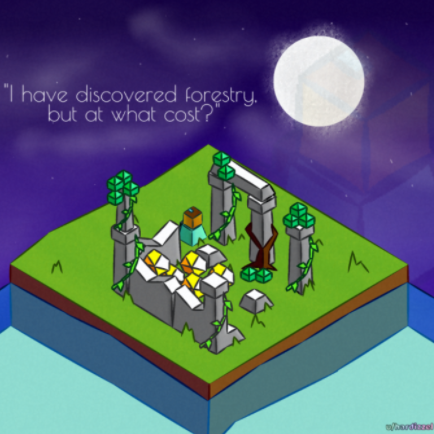 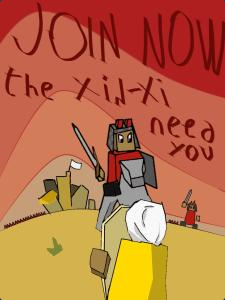 Tnt: Welcome to The Polytopian Interviewer, where I interview people on their experiences and views on the Polytopia discard community. I have E-is-the-fifth-letter. How are you doing?

Eis: Good. It's actually “E-is” now. It has been Eis for quite a while, but it's nice to see that people still remember the good old days.

Tnt: So how did you first get into Polytopia?

Eis: Technically speaking, how I first started my game was through the App Store, of course. Starting two years ago, I guess it was 2019, every Friday I would just look for random games, because there weren't any really good games to play anywhere. It was that weird time after the end of the flash era and before I really found any games I liked. I mean, I still haven't really found any besides Polytopia. There have been a few, but Polytopia is the only one that has stuck with me all these years.

Tnt: Okay. You're not very active in the Polytopia Discord. Any particular reason why?

Eis: I've just been trying to stay out of it. It was always a time suck. I said a lot of dumb things there before in the past. Eh, not really ecstatic about heading back there. I don't think people are ecstatic about seeing me again. I like the situation where it is now. I've kind of “retired” from that community.

Tnt: Sounds like people had a negative experience with you.

Eis: It was cyclical. A lot of things are cyclical. You meet your friend and you’re friends for a while, really good friends, then it's not as good anymore before you both pick it up again and you remember how good the “good old days” were. It was the same idea. They're good times and bad times. But I'm glad for the community. It was a nice community. People really liked each other. Even through all the drama, we still love each other.

Tnt: You're also a wiki contributor.

Eis: Oh, that was much more recent. I’m pretty sure it was since maybe summer, last year. Mostly because of quarantine and not having much to do. Since then, I've just really tried to improve the wiki by trying to make everything more organized. A lot of things haven't been really touched much since 2018 so I really try to make everything more, I keep using the word organized or systematic and to make it not some new wiki created by upstarts. The game, after all, it's five years old.

Eis: So the wiki is to reflect that. It shouldn't be a two year old wiki at this point. That's what I've been trying to do.

Tnt: I just discovered all the Fan Tribes wiki. That was pretty cool.

Eis: Yeah, the fan tribes wiki is not something I dabble in. I've never really participated much in the whole Fan Tribe thing. That's more of a mess. Not gonna lie.

Tnt: Makes sense. You were in Polytopia Main for a bit. Any comment about that?

Eis: That's from 2019. I think I must have changed by now. It can't be possibly the same anymore. But after two years, you've got to appreciate those old bastions that are still hanging around there. I'm not sure if they're still there but Mcompany, Espark. Those are the people that keep the server running smooth and they're always steered by the anchor by the whole community and I'm really grateful for that.

Tnt: Mcompany’s still admin. Espark has kind of taken a step back from the paper but still contributes. Foreverblue is kind of inactive, but is still admin.

Tnt: I joined eight months ago, so I have no idea.

Eis: If you go back to, I think it was like it was September 2019 or 2020, I thought it was September. Basically before the current system, there's a system of tribe advisors under the tribe leaders. And there was no admin, there was only mod. In fact, everybody was promoted. Well, not really. Only in name because they introduced a new role of admin. And that also eliminated the lowest role of tribe advisor.

Used to be tribe leader was a mod. They had moderation powers. I'm not sure if they had ban, but they had delete messages, etc. They really were the moderators of the servers. And the mods are like people like Skarm, gotta love Skarm, SneakyTacks, Mcompany the whole list. Though, they weren't really necessarily active, or if they were they were known for lurking around more. The more hands on moderation was all tribe leaders. I think tribe advisors had more power than tribe leaders currently do. Tribe leaders, their status has been eroded a lot. They actually had some formal power, but now it's just a status symbol.

Eis: Oh, wow. I didn't even know that. They’re worthless now. It used to be like tribe advisors were picked by tribe leaders, which were moderators. You should keep thinking of moderators when I say that.

Tnt: Do you have a memorable Polytopia game that you want to share?

Eis: It’s usually the conversation that’s more memorable. I remember 1v1's when there was a good discussion about the game after it took place. I remember team games or studying about what opponents are doing. And them either being stupid or quitting. I don't want to use the word stupid, let's say incompetent or just not cooperating well. It’s usually more about the community surrounding the game than the game itself.

Tnt: That makes sense. A lot of people like the community aspect.

Tnt: That's all the questions I had.

Eis: Thanks for the opportunity. Alright. Have a good day then.

Editor’s note: Since recording, Eis was unbanned from main and Ai-Moya and rejoined in early April.