Over one hundred players have signed up for the tribe duels. Many players are enjoying the event, and the in-app announcement has boosted server membership. Here are some comments on the casual battle event:

DasGooseMachine (Luxidoor) said, “I actually really like how fast paced it can be, some of the longer games can get boring but these are fun.”

Abstract (Hoodrick) said, “I think tribe duals is a really fun idea, but I’m not a huge fan of the maps being continents.”

Biggie Cheese (Imperius) said, “I hope another one comes around soon because its good fun meeting people and fighting for your tribe the only thing I would say is have it on might rather than glory.” 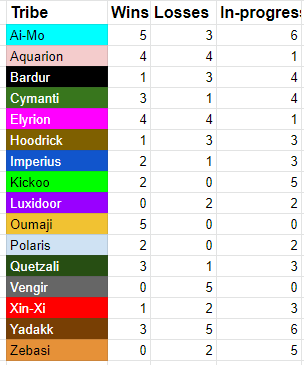 Currently, the first round is halfway finished, and it is clear that tribe brackets are not well balanced. Many players in tribes like Ai-Mo, Polaris, and Kickoo want to play, but cannot find opponents. Although the rules say that a prospective player may switch tribes to find an opponent in a different tribe bracket, less than four players have chosen to leave their first choice tribe to play for another.

Snowsort (Polaris) said, “I like [the duels], though activity is always a problem. Also a large variety of skill, mixing that in with how unbalanced the game is, it's interesting… but we have like 10+ Polaris and only 4 Luxidoor.”

Atlas#4512 (Zebasi) recommended, “Maybe [have] a waiting list for the tribes that have a lot of players and giving priority to players that also fill in for the tribes with fewer players. That way more matches all around! My favorite tribe is Elyrion but I filled for Zebasi this round since they were missing players and Elyrion had an overabundance. It would suck for me if Elyrion ended up losing in their matches and I couldn’t play them next round.”

The first round of the duels will end on August 11, so you still have a week and a half to participate.

Polychamps Speculation about the next Balance Pass

Here is a compilation of less than serious predictions about the next balance pass: Kahuna: I first came across Polytopia in the Google Play Store as a recommended app for me to download. It looked interesting, so I downloaded it and I really enjoyed the game. Eventually, online multiplayer came out and I was interested in it. Eventually I discovered that there was a Discord server and I joined it.

Tntmasta: How did you become an admin for the main server?

Kahuna: Bureaucratic work. Lots and lots of bureaucratic work. However, I can dig deeper as to how I became an admin. When I first joined this server, the server structure was vastly different from how it is today. The main thing you need to know about this time is that each tribe had one single Tribe Leader that was chosen by the last Tribe Leader when they got promoted to the rank of “mod,” which was what admins were called then, or when the past Tribe Leaders stepped down. These Tribe Leaders acted as moderators and as community leaders for their own respective tribes. Now, I like boom or bust strategies, and Kickoo's custom house potential in the game really resonated with me, so I joined the Kickoo Tribe. The Kickoo Tribe Leader at the time I joined was James, who was a really popular member within the whole server community at the time. I wasn't in Kickoo for very long when James got promoted and needed to pick a new Tribe Leader. I talked to James and asked them to consider me as the next Kickoo Tribe Leader and Blacklight got it, another active person in the Kickoo community.

After that happened, I had goal which was to become “mod.” However, I knew I had to get Tribe Leader first. So I helped Blacklight a lot with whatever I could. Eventually, my hard work paid off. On April 1st 2019, Blacklight stepped down and promoted me to be the new Tribe Leader of the Kickoo Tribe. At the time, each Tribe Leader had like a title, for example the Xin-xi tribe leader had "| Xin-xi Shougun" after their name. Kickoo's Tribe Leader title was "Chief" at the time, which I didn't care for too much. So I changed it to Kahuna. That is why I am also known as the Kickoo Kahuna. Anyways, about my journey to becoming an admin. While I was a Tribe Leader, the server structure changed and the Tribe Leaders became moderators and the mods became admins. As time went on, I realized I wasn't active enough to become an admin based on activity or moderation, so I knew I had to go a different route. I choose the route of getting things standardized and creating a handbook, otherwise known as becoming a bureaucrat for the server. Eventually it paid off. I was offered admin and I accepted.

Tntmasta: What are some of your responsibilities with your admin role?

Kahuna: So each admin has to do their own thing to make this server (main) run smoothly. I do a lot of paperwork-related things. For example, I standardize how we log rule infraction. I made almost all of the Tribe Leader ballots when Tribe Leader Elections was something we had on the server. I made a handbook/guide for the moderation team. I look at data from our logs to see if anything could be improved such as more consistency with a specific infraction. For example, I saw that we had a staff shortage and that our current system of getting new mods was failing, so I made the mod applications.

Tntmasta: What's all in your handbook?

Kahuna: Here is a PDF version of the handbook if you want one. In total there are five main sections. The first one is, “Introduction to being a moderator.” In this section, it is basically as the title says, an introduction to being a moderator. The second section, channels, covers what all the new channels mods have access to are for. The third section is punishments, which goes into a much more detail explanation on how we handle rule-infractions. The fourth section covers various things that should be mentioned but don't fit anywhere else. Then the fifth section covers the definition of some terms used in the handbook.

Tntmasta: What do you look for in a potential mod applicant?

Kahuna: For me personally, I look at why people want to be a moderator. It can be draining on people, so I generally want people to have a desire to help out the community or something like that. I also look for how people think the moderation team can improve, as the moderation team is far from being perfect and having people who can look at it critically and find ways to fix the flaws in the moderation team is a very nice trait to have. Identifying a problem is good. Finding a way to fix that problem is better. In addition to this, I also look at how people understand the rules. We had a couple moderators this time around apply, thinking that they wouldn't get accepted, but they did. They also didn't meet what I was looking for exactly either. So, if you don't fit this perfectly, don't let yourself think that you are automatically going to get rejected.

Tntmasta: What's it like to be connected to Zoy, the community manager and the admins in general?

Kahuna: I've never viewed it as anything too special. We're both human beings who live in this world. It isn't that hard to find someone like that. It’s like volunteering with fellow people who are dedicated to helping the same organization you are. There isn't much else to say.

Tntmasta: Why is the mod rules handbook more of guidelines rather than steadfast rules?

Kahuna: The mod-handbook is really a “mod rule handbook” as the question puts it. It is more there to keep the mod team more consistent with each other and to introduce newer moderators to becoming moderators. I also knew that people would try to use the handbook against the moderators doing their job. An example of this is someone commits a rule infraction and gets a harsher mute than what is suggested in the handbook due to whatever reason. Then they will try to argue against the moderator who handed out the mute that they were being unfair, when they weren’t. If someone feels like they got punished too harshly, feel free to contact me, another admin, or use the recently added PolyMail bot.

Tntmasta: For the Polympics server, will you remain just as a point of contact for the main server?

Kahuna: I'll remain a point of contact for the most part. If they ask for my help on anything, I may be inclined to help. If the Official Polytopia Discord Server gets more heavily involved with Polympics this year, then I'll follow suit. But for now, I'll stay a point of easy contact.

Tntmasta: You're quite active in Ai-Moya and contribute a lot to the Ai-Mo Times. Any comments on that?

Kahuna: It’s nice to see people in the community make posts summarizing news that is going on in the server. As for contributing, some of it is for trying to get data collection, some of it is more like warning that something is coming up that they may be interested in, along with other reasons.

Tntmasta: What about Polytopia beta?

Kahuna: I'm a beta tester, so I'm in the beta server. I like supporting the game, and beta testing is one way I do that.

Kahuna: Yes, I do still play Polytopia from time to time.

Kahuna: I have no favorite tribe.

Kahuna: The community, that is my favorite part.

Tntmasta: How about the community as a whole?

Kahuna: I remember when I first joined, I was welcomed. When I wanted to improve at the game, I could find other people who would be willing to help me improve. I can connect to many different people about a variety of different topics. I recall people being supportive when people are at a low point in their lives. It is this fundamental feature of helping others and being friendly that is my favorite part.