On August 24th, the details of Balance Pass 2 were officially released. This is a first and these public beta updates marks a change from previous game updates. Previously, the first Balance Pass in April 2021 was kept secret before its official release and beta users were told not to leak details.

Perhaps the information about the beta changes were made public because, despite previous attempts to prevent leaks, it was impossible to keep them a secret.

However, like the first balance pass, beta testers are not asked to evaluate and help develop the update. That is for the alpha testers. Rather, beta users can help look for glitches and report any problems to the developers so they can be fixed before the update is fully released.

There are two parts to Balance Pass 2 - General Balance and Cymanti Balance.

Balance Pass 2 - What does it mean?

Here is an overview of the anticipated changes to Polytopia.

Reportedly, Midjiwan and the game developers got many e-mails and other complaints from fans about the Balance Pass 1 change that moved chopping to free spirit and only gave one star per chop. So while chopping stays in the Free Spirit tech, it reverts to giving two stars per chop.

Many players were pleased with this change. Arthur, leader of the Bombers team, said, “I love chop so I’m happy.”

Others pointed out that increasing the chop profit in free spirit makes the forestry -> math tech branch less useful in comparison. Emjay, co-leader of the Wildfire, said, “Forestry dead”

Others felt that this change to the Free Spirit tech makes the chivalry branch of the tech tree even more unbalanced. Raichu III said, “So when chop was 1 star, I already thought it was kinda OP and made knights too strong. Now 2 stars is just busted. Increasing the price on knights is a nice try to balance this out. But I doubt that will be enough.”

Antcrafter said, “Knights to 10 was so unnecessary. A good player could easily counter knights.”

Some argued that the doomux units effectively got buffed. Not because of a change to the bug unit but because knights now cost 10 stars. Antcrafter said, “Doomuxes are definitely about 2 stars stronger, so they basically got buffed” 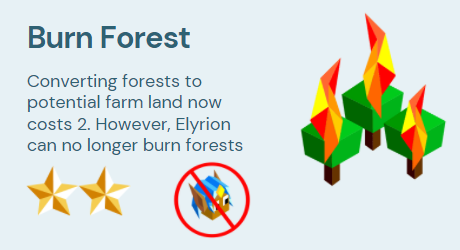 Raichu III said, “Burn forest to 2. I think this is just gonna be OP. Huge buff to Zeb, who was basically the only tribe on which construction was a possibility, now Zeb with chivalry is gonna be good :) But most likely, all the trees are gonna be gone by the time you get that much tech.”

Some pointed out that preventing Elyrion from burning forest effectively stopped them from carving out good custom house spots. “Ely cannot burn forest for CH now.” 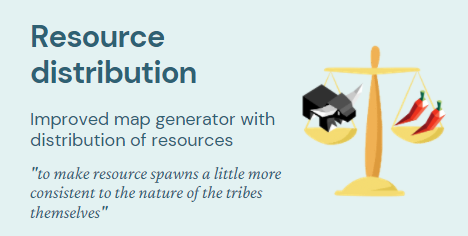 I'm happy to see map generation improvement. Not that there were any problems, but still nice to know the game is getting balanced.

Astrea said, “Putting the defense bonus on climbing is nice but it makes meditation worthless. They would need to decrease the number of turns to 3 to let any tribe other than Ai-Mo use it.”

Raichu III said, “The steal tech update seems kinda sus. I think it's a general nerf to early explorers. And a slight buff to special tribes in the early game. Not really sure if this is a good thing.”

This also brings up the question of a benefit to going last in a large FFA match. Would it be better to be the 8th player in a FFA game and collect more stars by the time you take your first turn? Also, Perfection mode may be much harder now that you can’t get tech trades.

Previously, players could anticipate the location of ruins and villages based on how the map was generated. With the change, it will be difficult, or even impossible, to predict the location of spawns, villages, and ruins. This may also make Elyrion vision less valuable as it was used to calculate potential village/city locations. 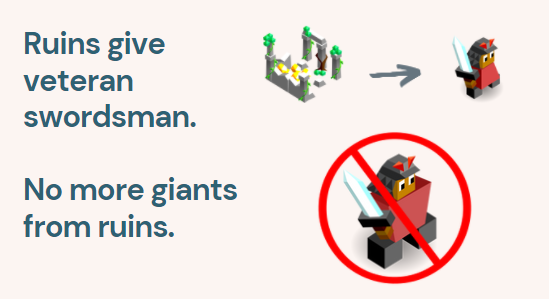 “The giants being replaced seems like a really good thing. Swordsman seems like a good unit to get from a ruin. Looking forward for this change,” Raichu III said.

Cody said, “The no giants in ruins is a very interesting turn making things much more based on strategy and less on luck.”

A server manager said, “The veteran swordsman is still a force to be reckoned with.”

Polytopia players have been arguing that the Cymanti tribe was ridiculously overpowered and needed a nerf from day one. SpitchDuche said, “Well, Cymanti definitely did need a nerf, and is still quite powerful so Midjiwan probably still wants it to be one of the more powerful tribes. I think the nerf it’s been given is good, but I would have liked a little more nerfing. I can’t think of much else they could do, but I’m sure they’ll still be powerful. Time will tell whether the current nerf is good enough.”

Artemis says, “The Cymanti nerf was inevitable, Midjiwan did this with Polaris too - release an OP tribe so everyone buys it, wait a few months, then nerf it.”

Cody said, “The balance pass is definitely something to look forward to, I believe this patch will boost polytopia gameplay, the Cymanti nerf is one we're all looking forward to and is long overdue.”

Lots of other members also agree with the nerf. Maburro said, “I looked at it in a positive way. If it means changing my play style so it’d be. Though I understand why people are mad over it, it’s gonna change Polytopia in a variety of ways. I think this balance pass is good because it’ll make room for many diverse strategies. This pass means that you can make more varied strategies.”

Nobelium Uranium said, “You can see the progression of quantity of mechanics in special tribes in the order they came out. Elyrion has unique mechanics, Polaris changes water combat in its games, and Cymanti has just a crap ton of new mechanics. Then you have Aquarion. Their 'unique mechanics' are a sad excuse of a special tribe. I think most of the problems comes from the fact that Aquarion is just outdated." 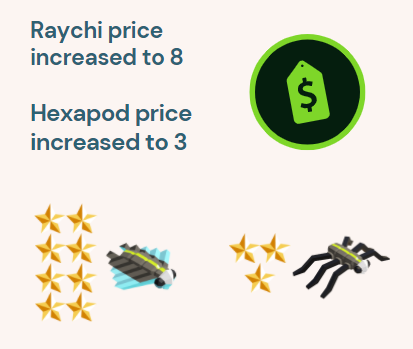 Many players expected the cost of hexapods to increase to three stars, the same cost as a rider. One of the moderators in Polymain, tamarissz said, “Hexapod and raychi becoming more expensive is a safe bet, they had no business being so cheap.”

Tamarissz also said, “Algae giving no population is an interesting idea, because now they can't really function as port replacements, but it makes sense that they function as bridges.”

A former admin on Polymain said, “Raychi navy were baaaaaaaaaaaaad until they got the algae up. Algae was what was OP before. Like, 8 star Raychi makes sense. It's just, the early and cheap raychi was only a small part of the OP-ness that is algae.” 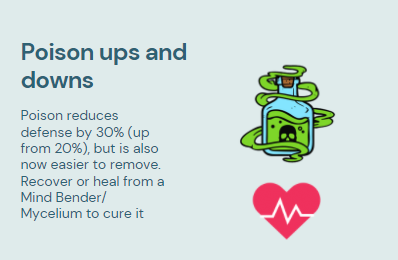 A server manager explained it this way, “Poison is more potent, but can be cured more easily”

Adhesivestiky said, “It's still sucky that you gotta lose a turn AND the unit is weaker, but less stupid overall.” 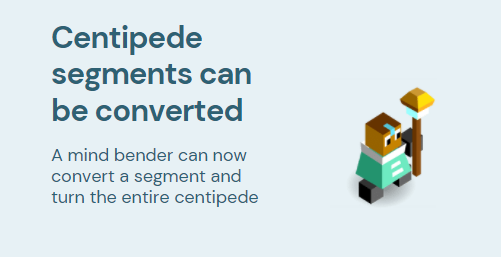 You can see an overview of all the Cymanti changes on the supplemental infographic.

With the changes to Cymanti and the increase in profit from chopping, Bardur appears to have benefited the most from the changes in Balance Pass 2.

Lemmon, leader of Ronin team, said, “Bardur is insanely OP again, nothing compares, most human tribes that get forests will be strong but bardur (and possibly imp) will be the strongest because they can get riding and free spirit on t3 to chop their capital, buy more techs, upgrade second city, and win.

“Zebasi doesn’t benefit as heavily because it is not able to buy Free Spirit on t3 after making a workshop t0. It also has much less forests.

“Imp will also potentially be stronger because of the resource adjustments making sure it has 2 fruits per village. Based on my results so far in beta, this does not deter away from its forest count too much. The only downside of Imperius is that, unlike Bardur, they lack the massive amounts of tier 1 resources (bears, fruits) to produce giants after shaving all forests. I think Hoodrick will be strong, Quetz as well, but nothing will compare to Bardur.

“To sum up this update, Midjiwan mentioned not wanting one tech/branch to be the end all be all. that is why they moved chop to free spirit in the first place. but reinstating its former glory of chopping for 2 stars while remaining in the riding branch has turned the riding branch, and free spirit into this "end all be all" of the game that they said they wanted to avoid. riding was already pretty much a must have, and now it has all the former glory of 2 star chopping wrapped into it. keeping in mind of course as zoy said that the game is deconstructed, and this current patch is not intended to fully reassemble the game, rather it is continuing to disassemble the game so it can be reconstructed in a more balanced, fixed state.”

Other Anticipated Changes to the App

Several user interface (UI) changes are expected to be released including a zoom in tech tree, enabling/disabling all tribes in tribe-picker screen by long pressing, game stats info screen reworked, tech tree is displayed on game-world background, and other minor bug fixes.

The biggest change to the app interface may be the addition of in game Elo. Elo is a ranking system, first developed in the competitive chess world, to give or remove points based on game wins and losses. The Elo will not be as extensive as what the Poly-Elo bot provides in Discord. The in-game Elo will only track win/loss records between two opponents. Perhaps this in-game elo will be expanded in later updates to allow for a more comprehensive ranking. 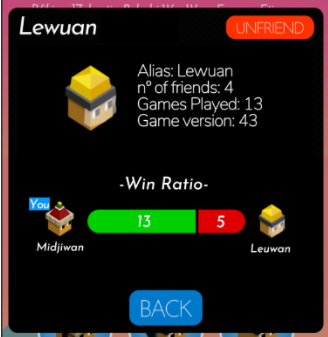 One longtime PolyChamps player and director of the Bullet Tournament and Double Dash Tournament said, “If not for Balance Pass 2… and new Elo in game, I’d get ready to retire. I’m not that much interested in the in-game Elo, but of its possibilities. Maybe that's the first step towards official tourneys.”

Another change, a purely cosmetic one, is the new look for the Oumaji sprite.

Dan, a mod and former tribe leader of Oumaji in PolyMain, said, “I think there is quite a lot of fuss around it since people don't tend to take change well. That can be applied pretty much anywhere. The fact here is that the new sprite is more accurate to how it would be if the Oumaji existed in real life. It simply looks better and well defined. Personally, it's just a really good update to the look.”

Alfrik, an admin on Polymain, said about the change to the Oumaji look, “I hate it and it sucks”

Thanks to all our contributors: Espark, Druid, Tmas, Tintin, Raichu III, Antcrater, and Lemon. A big thanks to Artemis for setting up the website for the newspaper. Also, thank you to our faithful readers for encouraging the paper to continue.