On Wednesday, Sept 8th, hours after the Balance Pass 2 was released, the community manager, Zoythrus, hosted a voice chat session. Here are some of the highlights from his talk:

On Sept 5th, the Ai-Mo Times posted a link to a survey to collect attitudes on switching teams in PolyChampions. An announcement in the PolyChampions server was posted along with the survey link on Sept 10th.

As of Sept 11th, 190 people had filled out the survey, 166 of which were players on PolyChamps teams. The vast majority of respondents were very satisfied with their current team. On a scale from 1-5, with 1 being not satisfied and 5 being very satisfied, both players who had switched teams and players who had not had the same average satisfaction score of 4.4.

34 respondents reported switching to another team in the past. The most common feeling about switching teams was excitement about joining a new team. Most did not experience frustration or impatience although almost half felt guilty. Most players who switched teams felt it had been easy or very easy to switch teams. 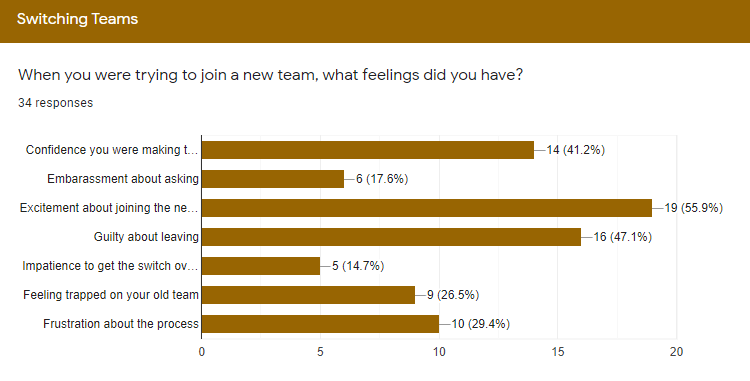 Mosty PolyChamps players who answered the survey did not report thinking about switching to another team or going inactive. Of the 166 respondents on teams, 11 (7%) admitted to sometimes thinking about making an alt to joining another team. 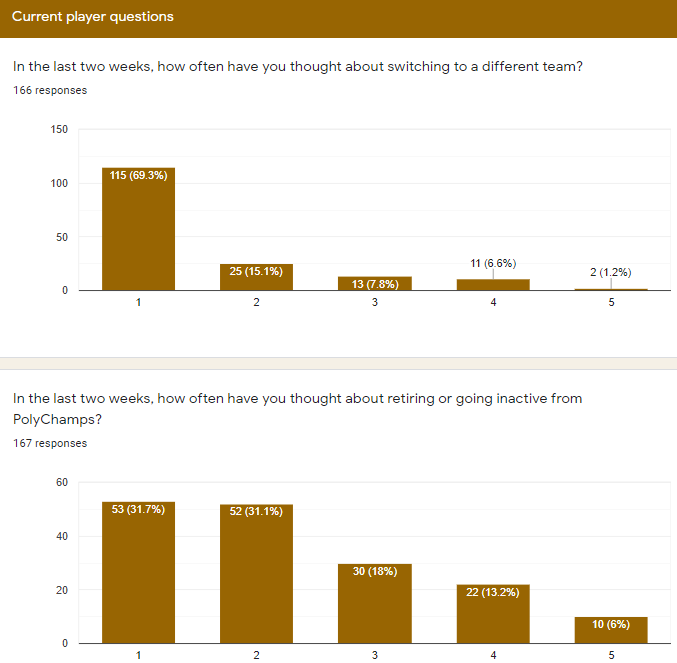 Finally, most players felt that it was somewhat difficult to switch teams.

Some comments from the survey included:

People should be dedicated to a team. I have been on mine for over a year and I have not once thought about leaving it and only got taken off my old team for inactivity because of college/life. I think switching teams is really hard because you have to leave the people you played with for a long time.

While good players should be traded for good value, player trade fees ought to not be exorbitant. The FAT system is best used to invest in new talent, and any player transfer system that makes it more appealing to recirculate existing talent ever bringing in new players is unfavorable in my opinion.

It's already easy enough to leave your team, you can basically ask and be gone within a few days in most cases. It doesn't need to be made easier.

Switching teams is good, but there also needs to be league balance, if you were able to switch teams so easily, there would be an even bigger divergence in skill balance between teams, as players that don't want to work as much will just want to join the best teams... I don't think that players should be able to just switch teams in an instant or even make it “easier” to trade. I believe that if you're drafted onto a team, you should work to make that team better; don't just quit on it immediately and switch to some better team.

Please keep in mind that this survey had significant limitations. 166 respondents represent less than 15% of the total members in PolyChamps server. It is likely that these respondents skew to more active and satisfied players who read the announcements. Players who are not engaged in the server would be less than likely to fill out the survey.

Overall, the vast majority of survey respondents were satisfied with their team. Players who had switched teams felt it was relatively easy, although some did feel guilty about it. Most feel the way trades are done now is fine and the system does not need to be changed.

Thanks to everyone who filled out the survey and for the PolyChamps mods for posting the survey link in the announcements.

Attention all birb lovers! The moon above Quetzali is nigh, and the All-feathered wants to find the mightiest warriors and leaders to fight by her side. Let the Quetzali tournament begin!

Quetzali mirror matches. Random map types. Restarts are allowed only once before turn 3. The rounds will be played depending on the number of players. If more than 18, there will be groups and then a tournament.

The prizes include either Nitro or a Quetzali merchandise of the winner's choice.

How to join? Fill out the survey https://www.surveymonkey.com/r/JFFLBZJ Contact Detective Dumb for more information.

Congrats to our new Ai-Mo tribe leaders: Etch-a-Sketch and Nox. Also, 1Chill|God of Tripods and Pi-Kappa were reinstated as tribe leaders. The previous two had been elected as TLs before, but had left and rejoined the server. They have all helped and contributed to our tribe in the past. It will be great to see where they help lead Ai-Mo going forward. 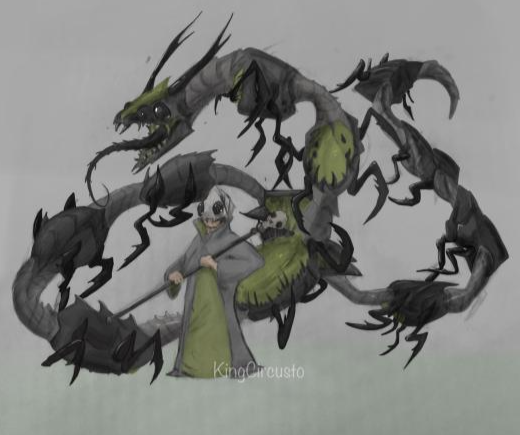 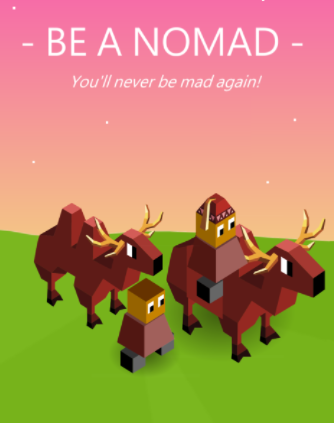 Deep beneath the square, a race of insects gained intelligence after discovering a mysterious substance. They watched the creatures of the world above, and slowly learned their ways and their powers. Over the eons, they grew in power and size. Now from below the square, they rise to gain power over the tribes that they idolized.

The Hyvers start out with modified building techs and a different tech tree. The “Hives” tech allows you to build hives, which cost 2 stars and can be built on any empty tile. “Swarm Tactics” allow you to upgrade your hives for 3 stars, which gives 1 more population to the city. These hives can then train a unit. “Colonies” tech gives you “Destroy Building” and allows you to build colonies, which cost 20 stars and can be built once per city. They give +2 stars for each building touching it and +1 star for each building in the city. 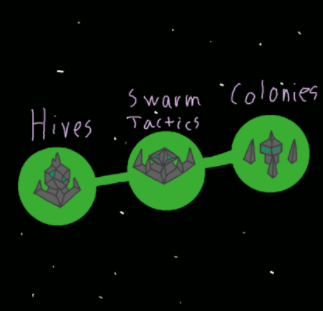 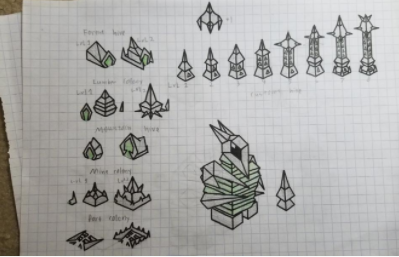 Thanks to all our contributors: Espark, Druid, Tintin, Noru, and Tmas. A big thanks to Artemis for setting up the website for the newspaper. Also, thank you to our faithful readers for encouraging the paper to continue.