Esports has been booming in the past few years of the gaming industry and with help from Challengermode, Polytopia is getting “Live Games” and “Replays” as a part of the new diplomacy update. On February 28th, we got our first look at the esports update. Live Games is a new gamemode and replaces the 5 minutes timer. It starts with a timer of less than 1 minute and all the unused time from your turn can be saved for the next one. You also get additional time for each unit you train and city you capture. This will help create the atmosphere in a “Blitz Chess” game.

Replays have a lot of potential. Ever wish you could revisit that game with your friend where you mercilessly crushed them? Now with replays, you can! It’s somewhat like a “spectator mode” in other games. You can share these replays with others and even save up to 10 replays.

The replays are going to be essential to Esports servers like PolyLive and PolyChamps. They could also be used to check for cheating in servers like CustomPoly, or in training servers like the Polytopian Times server. You could also review your own games and see what you could’ve done better. Here’s an example replay on Steam, an Imperius Lake small (196 tiles) game between Espark and Wannybot. Spoiler alert: Espark thought she was winning, but she was not.

Fan reaction Although the update was welcomed by many, it had its fair share of bugs too. Some notable bugs were the timer next to matches disappearing, game crashes, replays not loading and “Error 500”, which wouldn’t allow you to select your tribe.

Wannybot, co-leader of The Kraken team on PolyChampions, said, “Damn I love those replays … Gives you a much better feeling of how the game was going.”

TomasRibeiro, two time PolyChampions MVP award winner, said, “Bugs should be a rare thing, fixed ASAP, and not a constant in our life, that's killing the fun.”

Pomthom, co-leader of the Wildfire team said, “We've played plenty cymanti, no need to spam us with any more bugs”

Malpractice regarding the usage of replays Although replays seemed like a fun update for beta players, they could be (and were) used for nefarious purposes. When the beta released, there was a bug which allowed you to see replays of ongoing games. This means that you could see what your opponent did and is currently doing. Since you have their vision, you can know their spawn location, techs, and unit positions. With that information, you could also predict what they’ll do in the future.

Dastig, member of the Vikings team, said, “So I'm currently in an FFA and I can see a replay of it even though it isn't finished. This gives me an advantage because I now know what everyone is doing etc. I feel like this is a bug.” 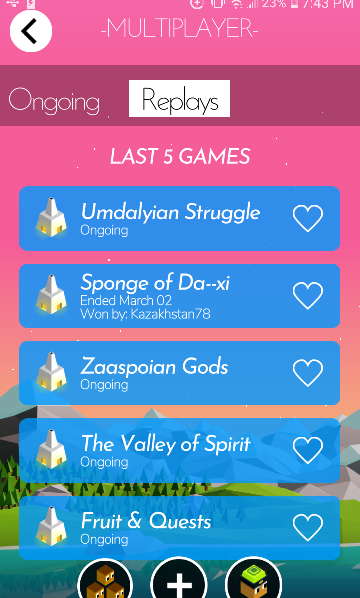 The replay exploit has caused all major servers, like Polychamps, to go on lockdown mode and pause all games for the time being. This bug has yet to be fixed.

On February 28th, I (Tmas) announced in the server Friendly Polytopia that it will be archived. It was the inevitable result of the heavy decline of overall server activity despite my efforts over many months. I started the server to find people to play casual games with since it was the perfect compliment to PolyChampions. After a year, Friendly Polytopia went from a brand new server to the newest beacon server with over 300 members and many features including mentoring, tournaments, and interviews. Of course, nothing can last forever, especially online.

As overall Polytopia Discord activity dropped, my server was one of the first to be greatly impacted despite its size. Combined with GullYY announcing that he won’t be posting videos as often due to college and deleting his own Discord server, I felt very detached from the Polytopia community. The two main things keeping me here were Friendly Polytopia and GullYY’s presence. With those drastic changes, I knew something else had to change.

Not wanting to keep trying to revive the server and get almost no changes, I ultimately decided to archive it. That way, people can still read the interviews, puzzles, tribe guides, etc. that I and a few others have built. Deleting the entire server would be disheartening, especially since I spent 1.5 years building it up. Now Friendly Polytopia is a museum piece, a relic of the past that was great and can only be preserved, but it can still be enjoyed.

People play and chat, and come and go as they please. Some decide they want to stick around for a while. Others feel it’s not for them anymore and find something else. After all, It’s all just fun and games.

A summary of an in-depth comparison between the Forge and the Mint as well as an analysis into the difference in value between population and income. By Cat-As$-Trophy

Is the old Forge that provides 2 population for every adjacent Mine underpowered? If the answer is a solid no, then we are in agreement. Otherwise, let's proceed.

Since the comparison between Farms + Windmill vs Mines + Mint is complicated due to the difference in spawn rate of their respective resources, let’s directly compare the current Mines + Mint to Mines + Forge. If we take the same starting resources and income, how do Forges compare to Mints?

The real question about Forges vs Mints is pop vs income. Investments in Income have a better return rate than going for Population. That Income yields a ramping benefit the earlier it is gained while Population only provides results once fully realized in a city upgrade. Often the economy is preferable to population. Sustainable choices of growth, both economically and territoriality, are key in Polytopia. Players understand that easy sources of stars, like whales or chopping forests, have huge benefits. However, the lack of respect for Income that is more valuable, yet much harder to come by, compared to the popularity in sources of Population which have more leniency in timing, is simply baffling.

Even if we disregard the difference in value between Population and Income, it is undeniable that there exist fewer methods to raise SPT than there are population. Benefits from chopping forests and Whaling are powerful, but limited. Only Customs Houses and the newly introduced Mints serve as reliable means of improving Income, for Embassies rely on enemy tolerance. On the other hand, Fruits, Animals, and Fish can be consumed while Lumber Huts, Farms, Mines, and Ports as well as Sawmills and Windmills can be built for Population. Even Temples of any kind grant Population rather than Income.

Simply said, early boosts in income have more impact than investing in population.

Mints directly outperform Forges for lower city levels with decent resource rate. If both are provided equal yet mutually exclusive value at low supply, and yield considerable economic advantage worth pondering over an extra Super Unit from developed cities for rarer cases. Therefore, the switch from Forge to Mint is hardly a downgrade.

It is not the change to Mints that makes the Mining branch feel underwhelming, it merely exposes the inherent weakness within that has been glossed over and ignored over the years. For those asking to revert Mints back to Forges, do note that you will be getting a nerf rather than a buff.

Paxu, also called Alfrik, has been one of the most active and revered mods in the Polytopia discord community. Only James, may his name be of blessed memory, had a better reputation than Paxu.

Because Paxu is fun, approachable, tolerant, and active, many members of the community feel comfortable reaching out to him in DMs if they have a concern.

I did this too. I sent a DM to Paxu in June 2021 when a mod was using antisemitic language. I also sent another DM to him in Aug 2021 when I saw girls leaving the server because there was too much sexism among staff and members. I felt comfortable reaching out to Paxu to complain. Now, I realize my mistake. I should have used PolyMail.

The problem is, when Paxu gets bombarded with complaints from members, it skews his perception of how members feel about the server and it limits what the rest of the mod team hears.

Getting all these hateful DMs is a huge strain on Paxu. He has said how upset it makes him that so many people dislike the mod team, that the current group of mods is least liked the PolyMain server has ever had. All these hateful DMs give Paxu the extreme view that everyone, literally everyone in the server, hates the mods. This is naturally very stressful.

DMs are a deadend

Funneling complaints to just one person is not effective. In the two examples above when I complained to Paxu, those concerns never reached the ears of the other mods. Yes, Paxu listened to me in DMs, but the issues went no further. Also, when he states that hundreds of people are complaining to him in DMs, the other mods find it hard to believe his claims.

When people complain to me in private about the server, I listen and try to understand. But I do something else. I always ask them to send a Polymail. This way other mods hear the complaint and the issue gets more attention. Polymail was introduced to the server in May 2021 as an anonymous way to allow people to complain to mods. Yet to this day, when I suggest people use it, most don’t know it exists. Polymail could lighten the load on Paxu while also keeping concerns anonymous and heard.

Overall, Paxu is an amazing admin. Because of that, members feel comfortable reaching out to him in DMs when they have complaints. This is good that people find Paux approachable. This is also bad because these private messages put a strain on Paxu. Also, the other mods (besides Paxu) need to hear the complaints. So please, next time you want to complain to Paxu in private, or any other way, remember Polymail.

Thanks to all our contributors, Tmas, Espark, tan11pan, and Hoodwick and also to our readers. A big thanks to Artemis for setting up the website for the newspaper.