Beginning at midnight, UTC, two pranks were executed in PolyMain. PiKappa, demoted admin who was recently granted the veteran role posted in the announcement channel:

In light of actions taken by the moderation team since I left, I have decided to take matters into my own hands, and am doing some server re-organization to make the server better in every single way. I am aware that many of you may have some questions about my latest decisions such as "What happened to the admins?", "What do we do now?", and "What are you going to do about the fact that no one asked?". Rest assured, there is no one who can stop me, do not resist. The members of the mod team who I have not erased have agreed to my rulings unanimously, and we will begin implementing them shortly. Have a nice day :)

Most of the public channels were given new, silly, names and all the tribe chat channels were renamed to ‘furry role play.’ Also, most (but not all) of the staff changed their names to ‘Zoythrus™ | Midjiwan's Prophet’ and switched their profile picture to look like his. Many other members of the server joined in the fun. 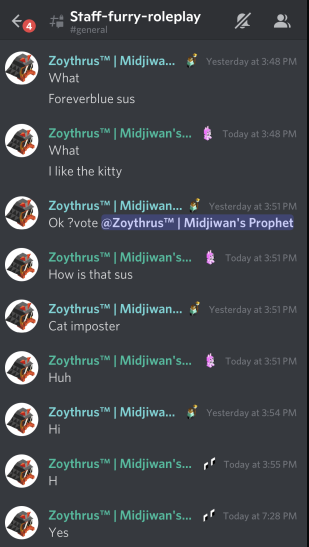 At least 38 members changed their name and profile picture to impersonate Zoythrus, the community manager. It was confusing and chaotic for a day but most agreed it was fun.

PolyChampions prank was to declare that the next season would scrap the current teams and go back to the original 10 teams from the first season. Players were instructed to join one of the ten color based teams.

Each color team also had fake team servers with different fun stuff. Team Magenta had one of the more extensive servers - see their amazing strategy guide below.

The Xin-xi terrain is planned to be changed to flaming hot magma as Midjiwan is planning on turning Xin-xi into a fire tribe and replacing them with a new human tribe that starts with mining.

Burn forest will finally return for Elyrion in the form of "Move Forest", which allows them to move a forest/lumber hut/sanctuary in forest/forest temple to an open field/fruit/crop tile. Costs 5 stars.

Bardur is rumored to get yet another color change, this time in the form of #062b10, a dark forest green that will match their thick forests.

Luxidoor will get a slight buff that allows them to start with 7 stars each game instead of 5. Their capital will still be level 2 without a workshop, though.

v110, the Infiltration update, will add the Invisibility Detector, a new building, give hidden units the ability to disarm said detectors, and add two more units, the Agent and Spy.

Apparently data mining within the game found that there's already code suggesting at least 4 new tribes, bringing the total to 20 And searching through the game's files has revealed a new ground tile asset simply called "terrain17", presumably the terrain for the 17th tribe, which is a rocky brown texture, possibly suggesting miner or mountain tribe

Special units for regular tribes have also been rumored. One source says that Imperius will get a new super unit, called the Gladiator, which is available to choose alongside a giant. The minor points stat in Might games will be changed to the number of cities, as points don't matter in Might games.

With v100, the Trade Update, you'll gain access to Thieves, which can steal resources and technologies from other tribes, and even units! They can't siege or capture enemy cities, and cost 8 stars to train, just like cloaks. The Merchant will be able to build special roads called railways, which can connect foreign cities together, giving serval buffs like road expansion, embassy boosts, and even trade bonuses. The new Trade mechanic will allow you to offer, accept, deny, and alter trade requests. Fun!

It's also rumored that Midjiwan will be releasing their very own Polytopia NFTs, although these claims have been heavily denied by many. These NFTs will be of various Polytopians, and their cost will start at 56,237 Ethereum. And finally, bots will be updated to no longer spam mind benders and cloaks late game, and will also stop spamming temples in non-point related game modes. 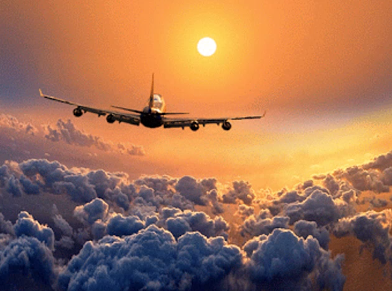 My strategy guide will focus less on broad macro, though I will make a guide on that later, and more so small techniques you can use to investigate and extrapolate extra information. (edited) First and foremost is a good friend of mine, Boeing-747. It really just peels away an extra layer of clouds.

Now some people who are very concerned about the climate think Boeings ruin the spirit of the air quality, but there's workarounds to hide your emissions and force enemies into submission. Make forward move -> "I took a gamble/I play aggressive" Play defensive -> "Didn't want to risk anything" See things that you shouldn't -> "Educated guess/there's a formula bro/intuition" The last one will be especially important for cloaks, just know the formula for how they spawn my children. Lastly, everyone likes to fly in a Boeing-747, especially the Jets. 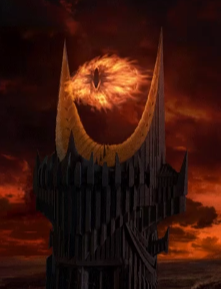 There's a reason @Majestic Magenta calls me the radar, and that's because I'm the Eye of Magenta. That's me overseeing Magenta armies in the fog

And you too can see into the fog with a bit of training!

To make inferences about the map, you need to know how maps are created. Let's take capitals for example. They'll spawn in their sector, such that their 5by5 doesn't leave their sector. On 2v2s this creates a 5by5 grid in the middle of a quadrant, 2 tiles from the edge The game does its best not to let 5by5s overlap, which creates orderly and predictable patterns like that. But there are 2 exceptions 1) When map density is so high 5by5s overlap 2) On tiny 1v1s when a player is too close to another quadrant, thus displaying the enemy capital more towards the middle rather than in a quadrant 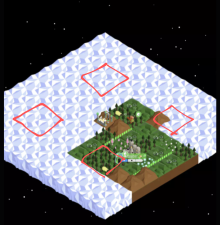 Now while this implies what quadrant the enemy is in, I'd like to offer another way to verify that information, via village prediction

The way spawn generation works is villages are placed, and then resources generated around them. This makes the concentration of resources much higher around villages, especially the 3by3. Using this knowledge you can look for concentration of resources to guestimate the location of villages. This is a skill that will take practice, but will pay off greatly. In time you can make this skill sophisticated enough to have a spatial understanding of typical distances between villages, and be able to predict the location of villages you don't see or figure out how a long line (say 5+ around a corner) of resources usually implies 2 seperate villages rather than 1 central one

Using this knowledge, I want you to extrapolate where the enemy is on this map. While this knowledge was possible t0, it should be blindingly obvious here on t2

The heavy resources in the east, corresponding to the black village prediction are too close to where a capital spawns, ruling out east as a quadrant option. The fact that villages generally have so much space between them, and the lack of resources in the NE shown in purple, we infer a lack of villages in the NE, but one by the N. (Specifically N of the ruin). This makes a capital in the north impossible. 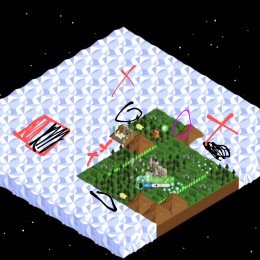 Some might say the village isn't N of ruin and we can't know that for sure. Don't know what to say but my understanding of how villages space and resources locate makes it an absolute for me. How you would have known this at t0 is seeing your capital is displaced out of the 2 by 2 grid. East can't displace you towards it, game doesn't like nearby 5by5s. North can't displace you, there's no need to displace if they're in the furthest quadrant from S. But the west pushes you away from it, which means the capital can only be in the 2 tiles that would actually displace your capital from your 2by2 for being too close, which also implies there's no village between y'all because it would have to be in the 5by5 of one of you which is impossible 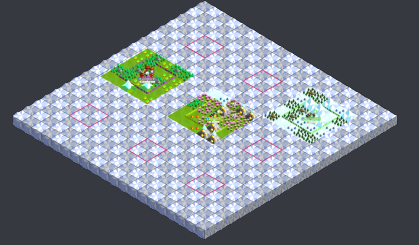 This is an advanced exercise of how to hide your Boeing 747. Such information can be crucial to unearthing the secrets of the map and getting easy wins. As a test of your skills that you will continue to develop over time and turn you into fierce warriors, try to tell me the exact tile an enemy capital is on here The only thing higher than airplanes is me. Cuz I stand on the shoulders of airplanes, without them I'm crippled.

By Tanya the Evil

The Special Tribes don't need more than a week. With them all being "out of this world", it makes sense for them to not have a Tribe Moon. And a month, or even two weeks would almost always interfere with another tribe's tribe moon. A week to celebrate the occasion is more than enough.

Special tribes, however? They aren't the same at all. Aquarion are mutants, Elyrion are witches, Polaris sold their soul to the eternal cold, and Cymanti have their free will forcibly removed by Ciru bugs. They don't add to that whole "different yet part of the same Square'' deal that the Twelve do.

Making a bigger show and dance of the Special Weeks - like having Special events as well as the customary art events could be a rather easy way the Server compensates for Midjiwan's firm [but ultimately, very reasonable] decision. It would give players a reason to actually look forward to Special Tribe Weeks as oppose to simply having them come by then go for a year.

Did Midjiwan think this deep into who gets tribe moons? Hell if I know. Does that matter? Probably not.

Special Tribes do need more attention on the Polytopia Server. However, increasing the length of their celebratory period isn't gonna do it. It's just going to take away from the Twelve that are ultimately a more essential and ground part of the lore - literally shaping the Polytopia world.

Thanks to all our contributors, Espark, Anthonv, Tanya the Evil, Skrealder, and Hoodwick, and also to our readers. A big thanks to Artemis for setting up the website for the newspaper.