On May 11th, Zoythrus announced a release date for Diplomacy - May 24th. A countdown was added to the website. 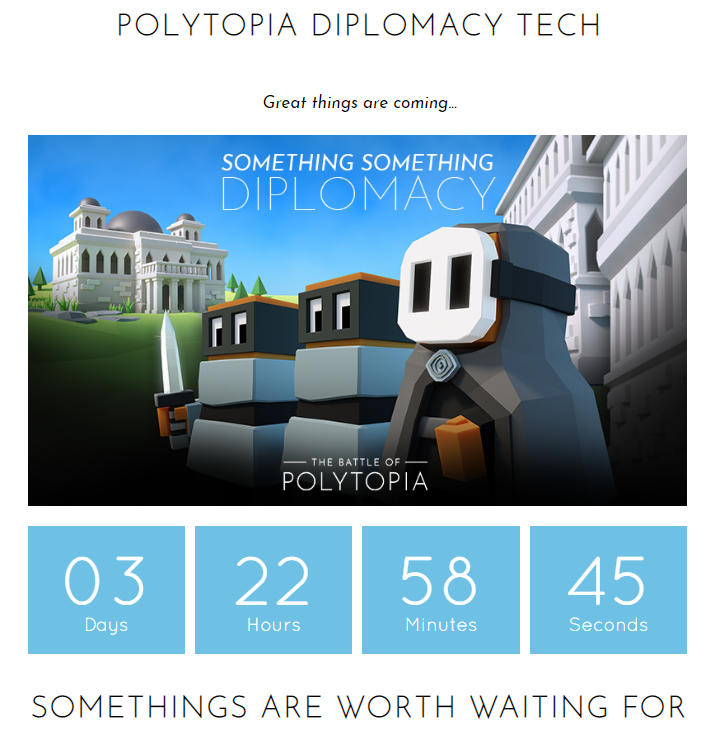 Midjiwan has been spending more time in the server, asking about bugs. He confirmed that the current version of beta would be the one released

End of the TL System, Again

After only 5 months, the tribe leaders system was ended, for good. The moderation staff was divided on the issue. About half felt the TL system was bloated, unnecessary, and not significantly improving server activity. Others felt that, although it wasn’t needed, overall the system was good for the server, that it improved tribe related chat and events. Zoythrus made the call.

The server manager promised that to compensate for the lack of TLs, the server would be promoting some new moderators and other staff. “We hope we can get the best parts of the TL role, merge it into the moderators role, while also reducing bloat and ultimately streamlining things”

Like the moderators, server members had mixed feelings about the loss of TLs.

One Cymanti member, ••• said, “I think that the TL system had a very positive impact on the tribes as they were previously, it is a great shame that it was removed.”

PrancingPony said, “Regarding TLs, I think removing [tribe leaders] without attempting to rework them is a debatable decision. But alas, perhaps it was truly for the better to avoid future unnecessary debates and arguments.”

Robin Hoodrick, former TL of Hoodrick, said, “The tribe leader role is a pointless role that way too much time and effort was put forth for. The benefits could be accomplished with other roles and the tasks tribe leaders were given were so measly/pointless and the tribe leaders who did go above and beyond could have done it with a different role such as director or moderator.”

Pixel, former TL of Quetzali, said, “It was quite sad to make a big thing about bringing back this role and delete it 3 months after but it's understandable by how it evolved and the problems it created.”

Anon said, “lmao, I didn’t even know they still exist.”

To help celebrate the Luxidoor tribe moon, PolyMain added the UnbelievaBoat economy bot to allow users to mimic the tech tree in Polytopia to become fabulously rich in fake, digital currency called stars. The idea was first proposed by Krab King in April. McGoon, Tanya, redish, and Espark worked hard to get the bot up and running. Users can use the economy bot to work, earn income, and progress through the Polytopia tech tree. On May 14th a combat system was added. 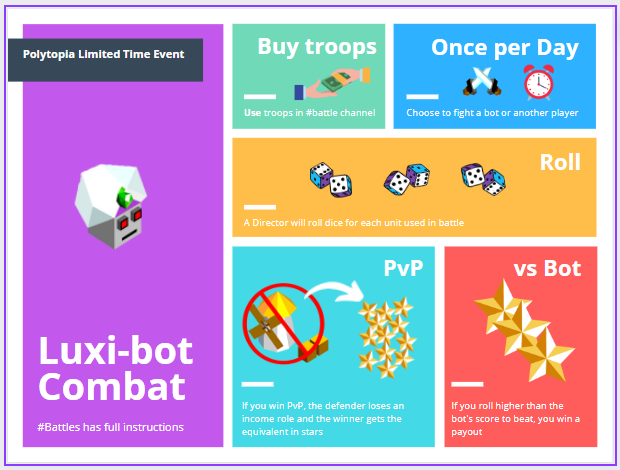 The bot was an immediate hit with server members. The Luxi-bot channel has quickly become one of the most active in the server with over 90 members playing the mini-game.

Hoodwick said, “Luxi-bot is fun. I like the way combat works. People can’t attack me ‘cause I only have tier 1.”

Ghalind said, “I think Luxi-Bot is a good addition [to the server].It increases server activity via bringing a new situation involving commands and reset times, bringing more people online at different times. It allows people to have an interactive part of the server and offers a fun game. AND it can allow new people to interact with each other via the pvp option in battles, allowing more server communication. Overall it's a highly useful bot, and a fun one. Removing it would be pretty stupid, no offense.”

On May 18th, Tamarissz, a server admin who’d been promoted in January, posted a video in general of a person being violently run over by a truck with the comment, “Do not watch this.” A few minutes later, she deleted the post.

Multiple users complained about the gore in the video.

Sam da Mad said, “It was honestly disturbing to see. Had I been prepared I'd probably not have been so disturbed, but still a little. But it just popped up.”

Shortly after, Tama was demoted from mod and admin roles. She still has the veteran role.

Jusnip, one of the mods said, “I’m sad that Tama is gone, but alas it’s probably for the best.”

When asked why she did it, Tama said,

“My shitposty side overtook me for a moment. [I] wish I just stayed a veteran now. It's a shame, really. As soon as I learned that someone managed to save the video in the few seconds when it was in the chat, I knew it was over…my apologies

“I recognise my mistake, but don't think any harm was done, as I deleted it immediately after posting. All I ask is that you recognise the good that I have done. When I came back [from my break] to being an admin, I couldn't really do it anymore. I couldn't voice my opinions for keeping the tribe leader system. I moderated all alone in the morning hours (of GMT). Seriously, every day I was alone, all the other mods were online in the same stretch of the day, I recommend you look for a replacement in the new mod promotions. Slowly I became what I swore to destroy, a member of the inactive mod majority and now a shitposter who kicks up the rules.

“So yeah, I apologize and I am ashamed of myself.”

The Ai-Mo tribe won the April Total Forergy event. In addition to a spam channel and a new sticker, the tribe gets a custom ! command for Mee6 in PolyMain. Tribe leaders have opened a contest in the Ai-Moya server to help decide the new custom command. The command should be related to Ai-Mo and must follow the PolyMain server rules. Server members may submit more than one idea. Voting will take place on June 3rd.

Cloaks spawn daggers in proportion to the size of the city, so use them when you know you’ll get enough daggers to take the city. On the other hand, be sure there is enough open space around the city you are attacking with the cloak to spawn all potential daggers.

If you are going to break the treaty, be sure to move all your units and then break the peace. If you break a treaty, you will not be able to move your units the rest of that turn or the next turn.

How and when to use them depends largely on whether you are playing a 1v1, FFA, or a team game.

When you are up against one opponent, asking for a peace treaty or placing an embassy isn’t worth it. Along those same lines, you won’t have the opportunity to use cloaks in a 1v1 if you meet your opponent very early. Cloaks are a late game unit, best used when you can sneak an invisible unit up to an opponent’s city. Also, beware of getting cloaks in cities too close to the fighting. Cloaks spawned in cities near fighting give any opponent in range of the city a defenseless target.

FFA games are where diplomacy becomes more useful. Capital vision helps you see more of the map and building an embassy reveals more tiles round the capital. Getting embassies with players who are far from your terrain can be a great temporary boost to your income and allow you to get tech faster. As long as you don’t expect to fight an opponent any time soon, setting up a peace and/or and embassy is a good idea. However, there can only be one victor, so at some point, the peace will break. Be prepared for betrayal.

Although not formally part of the app yet, team games, like 2v2 or 3v3, are where diplomacy will shine. Getting a peace treaty with an ally early will be key to increasing income and coordinating efficient attacks. Also, you can share your ally’s roads and avoid their zone of control.

Thanks to all our contributors, Espark, Tanpan, Noru, and Hoodwick, and also to our readers. A big thanks to Artemis for setting up the website for the newspaper.